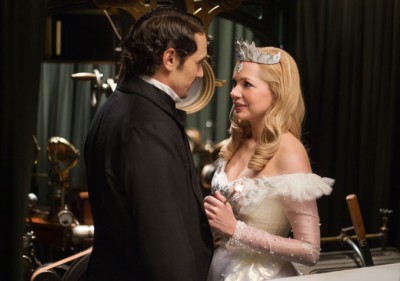 At one point, our collective return to Oz (not be confused with Return to Oz, sorry Faruza) was going to see director Sam Raimi deploy Robert Downey Jr as his titular wizard. The short list after Downey split must have consisted of just two names: James Franco and “a bag of dirt and sand.” “A bag of dirt and sand” must have had schedule conflicts.

Look, James Franco must be stopped. For too long we have been held captive by what we assumed was a dopey but charismatic grin but what is, in reality, the modern face of banal attractiveness at its absolute worse. He is a talentless, vacant black hole of suck, an ignoramus so gifted at ineptitude that the tornado featured here was no special effect but a byproduct of his trying to have an original thought. Without him, literally with almost any other actor, Oz would be a visual diversion and not a pretty cupcake with a turd on top.

The film begins in black-and-white in 1905, with Oz (Franco) as a struggling carnival magician and successful womanizer. His hot-air balloon ride deposits him in Oz, where he promptly meets Theodora (Mila Kunis), a witch with abandonment issues. Her sister, Evanora (Rachel Weisz), is the guardian of the throne in the wake of the king’s death. She claims that the land is being plundered by Glinda (Michelle Williams), an accusation the audience has a hard time buying knowing Glinda’s given Christian name is “The Good Witch.” With the aid of a good flying monkey (Zach Braff) and a tiny china doll (Joey King), Oz sets out to fulfill a prophecy about a wizard that defeats the wicked witch. We know where things wind up, the ultimate peril of proposing a prequel, but along the way there are munchkins, mischief and miscues by the man in the top hat too numerous to count.

Take Franco out and course-correct some wonky acting by Kunis, and this is a fine film that expands the Oz universe thanks to a script lovingly crafted by Mitchell Kapner and David Lindsay-Abaire. There’s just one other problem: It’s actually pretty misogynistic. Cursory research reveals that L. Frank Baum was married to a suffragette and was, in fact, the secretary of the South Dakota suffrage organization. The equality of women mattered to him, so his heroes were always heroines; in fact, the one male hero in his book series, Tip, was revealed to actually be the female Princess Ozma in hiding. Yet here comes a Hollywood adaptation focusing on a lustful wank redeemed with more lies. And that’s not what’s most troubling.

Three great actresses with three prominent parts? Oh, my stars and garters! But Theodora is depicted as a commitment-obsessed banshee; Evanora is the stereotypical “bitch in control” and Glinda, despite having actual magic, can’t deliver her people from bondage until a big, strong man saves the day. Dorothy’s water-chucking and wizard-exposing seem downright Gertrude Stein-esque. While promoting this, Franco opened the Daytona 500 by declaring “Drivers and Danica, start your engines!” That verbal miscue is pretty descriptive of a movie that sees women circling a man for no reason. Visually, it’s just nice. But Oz isn’t supposed to be nice; it’s supposed to be magic.