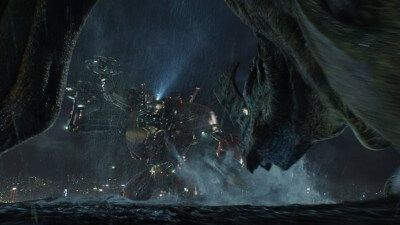 There’s a really, really good chance you know if you like Pacific Rim without ever having seen it. Just close your eyes and ask yourself this question: Does the thought of nearly mountain-sized Transformers wailing away on Godzilla’s uglier stepsisters with rocket punches and wrist swords excite you or do you have no idea what most of the words in the first half of this question mean? If you’re in the first group, congratulations! Writer/director Guillermo del Toro just spent nearly $200 million worth of rich people’s money to make a movie literally just for you. If you’re in the latter group, try to be happy for the first group. They need this.

Online critics, folks who can largely be politely described as “nerd-capable,” have declared Pacific Rim only slightly less socially significant than a messianic encore. Many traditional print critics, folks who can largely be divided into “pull-quote seekers” and elitists, have poked at it with verbal sticks. Most often, the truth lies in the gap between sizable groups with polar-opposite opinions, but in this case, they’re both 100% right.

There’s been no sleight of hand in trailers: this is a movie where kaiju (giant monsters) rise from an interdimensional bridge in the ocean to destroy humanity. Humans then build Jaegers, which is the German for hunters, which refers to huge honkin’ robots here. Each Jaeger is piloted by two people who link minds for reasons you don’t care about if you’re willing to accept the whole kaiju thing. Our generic hero, Raleigh Becket (Charlie Hunnam), was once a Jaeger pilot but quit when his brother/co-pilot was killed by the knifehead of a monster called “Knifehead.” With the kaiju growing stronger, head honcho Stacker Pentecost (Idris Elba) brings him back for one more go with a new co-pilot, Mako Mori (Rinko Kikuchi). Meanwhile, Dr. Newton Geiszler (Charlie Day) and Dr. Gottlieb (Burn Gorman) are doing their best to provide sciency answers, humor and a viable subplot.

Those who deride the film as silly spectacle are correct. From goofy dialogue like “Let’s do this…TOGETHER!” to the fact only the robots’ names will be remembered, Pacific Rim is two hours-plus of watching someone play the most awesome video game ever. This means anyone who gives a good review to this movie but claims “video games aren’t art” has more mouths than some intergalactic demon beasts. But those who squeal about the action, the scope of the film and the unparalleled action are also correct. All of the money is in the relentless monster-fighting violence, as evidenced by the fact the lead actor is whatever a Charlie Hunnam is. Ultimately, the question is whether you can get behind simplistic sci-fi mayhem.

Pacific Rim is gargantuan entertainment rife with the most acceptable violence: the kind where the “blood” spilled is oil or glowing-blue-alien-liquid. Remember: Top Gun wasn’t beloved because Tom Cruise sold a complicated romance (unless you count Maverick and Iceman, but I digress). Jaws is named after the central special effect. And Pacific Rim will satisfy the hell out of those who let it.