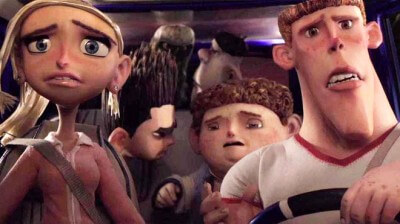 Before Pixar flexed its artistic muscle (a muscle they could stand to exercise more frequently these days), the message in American animated films ranged from “always be true to yourself” to “always be true to yourself and also get heterosexually married.” Paranorman isn’t about self-confidence or individual expression. It’s about how people can be huge, cruel dicks. Specifically, when confronted by those with unique attributes, uneducated mobs often become terrified to the point of violence. That this point is driven home via stop-motion zombies and a witch is utterly fantastic.

Norman Babcock (Kodi Smit-McPhee) is a spiky-haired pre-teen with a hormonal cheerleader sister (Anna Kendrick), dismissive father (Jeff Garlin), concerned mother (Leslie Mann) and dead grandmother (Elaine Stritch), who Norman still sees and talks to. His ability to communicate with the deceased has not gone unnoticed at school by thugs like Alvin (Christopher Mintz-Plasse), leaving Norman friendless until he meets fellow bully-target and poster child for juvenile obesity Neil (Tucker Albrizzi). When his uncle, Mr. Prenderghast (John Goodman) reveals he too has this supernatural gift, it is in a warning that only Norman can stop a witch burned at the stake 300 years ago from raining destruction on the town.

First things first, Paranorman is funny. Not “funny for a kid’s movie funny,” but legitimately clever and hilarious. Fart jokes and sly sexual references for the adults are what pass for comedic bait in most animated fare, but writer/director Chris Butler is more gifted than that. Hell, each and every supporting character in the film is duly motivated and more fully realized than most roles inhabited by flesh-and-blood humans elsewhere.

For example, Neil’s observation regarding the abuse he receives at school for his weight is remarkable. He tells Norman that bullying is simply a part of “human nature,” and that Norman himself would likely be a bully if he were “bigger and stupider.” Younger audiences are usually spared that degree of genuine insight, mostly because they aren’t trusted to receive it. Here is a film that does just that. Similarly, the climax doesn’t involve convincing the rampaging witch she is wrong; it hinges on getting the pitchfork-and-torch bearers to realize this mess is pretty much their fault.

Paranorman admittedly depends on other conceits (The Sixth Sense, every afterschool special ever). It also occupies a weird position, in that it’s too intense and scary for the youngest kids and slightly too-kiddy for older children. That said, the humor, warmth and message are likely worth the risk of accidentally warping or boring a child.

It’s worth noting a character in the film is gay, not implicitly but explicitly. It’s easy to infer as much if you’re paying attention, but when it was outright confirmed, it induced gasps from several audience members. This revelation merely underscored the flick’s existing and obvious theme of brutality and isolation created by the dominant groups in society. Still…it was a pretty bad-ass move on Butler’s part.