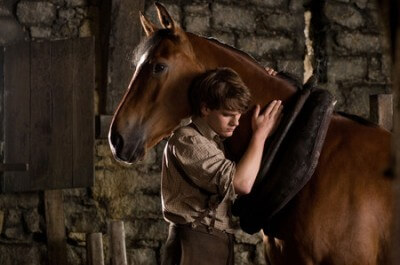 Steven Spielberg is an unrepentant schmaltz addict, and War Horse may represent his biggest binge to date. Crammed with comforting cliches and overstuffed with sentiment, this lifelessly dangling chunk of Oscar bait feels purely calculated to prey on the emotionally vulnerable. The rest of us calloused souls are forced to endure a pretty looking but ultimately shallow journey of a personality-free horse who bumbles through a World War that serves only as a convenient setting.

This is actually the third reincarnation of Joey the horse. His story was first told in Michael Morpurgo’s novel before it was reborn as a Broadway play and finally evolved to the big screen. Presumably, the events are largely the same. A young farm boy named Albert (Jeremy Irvine) acquires said horse, loves said horse and then loses said horse when his drunken father (Peter Mullan) sells him to the British army for use in the first World War. Joey is owned briefly by Captain Nicholls (Tom Hiddleston) before he gets swiped the Germans.

After Joey is abducted and inadvertently freed by two AWOL German soldiers, he is discovered by a young French girl (Celine Buckens), who loves him with the reckless abandon all girls seem to have for horses. Unfortunately for her, Joey is then repo’d by Germans and finds himself on the same front lines as—wait for it—Albert, his original sad sack owner!

As odd as a critique as it may seem, the film’s biggest problem is its titular character, as Joey is one boring equine. Actually, there is a goose that lives on the family farm at the film’s onset that demonstrates more personality in a few scenes than the equine protagonist does in several hours. The problem is simple: If we’re following the life of a horse, we’d better give a crap about that horse.

Spielberg seems content to simply cue our emotions using John Williams’ surprisingly heavy-handed score and cloying character beats. And these are characters we can barely be bothered to care about, as cramming the story of nearly half-a-dozen owners into a little over two hours doesn’t leave much time to develop much of a bond with any of them.

Worse yet, we rarely get any real insight into life during wartime, which is ostensibly the reason to set a story during a war. Even the film’s best scene, in which an American soldier and a German solider pause trench warfare long enough to pursue a shared goal and casual conversation, is one that has been used in copious war films. Combine all of this with Irvine’s woefully doe-eyed and obnoxious performance, and you have a tiresome misfire nobody saw coming.

Aside from a few magically shot scenes, this is Spielberg on autopilot. It’s this year’s The King’s Speech, a perfectly harmless if tepid endeavor designed to be more inoffensive than entertaining. Of course, this means War Horse is a shoo-in for scores of award nominations, even if we’re all struggling to remember that it existed just a few years from now.