Home » Film » Being Near Emma Watson 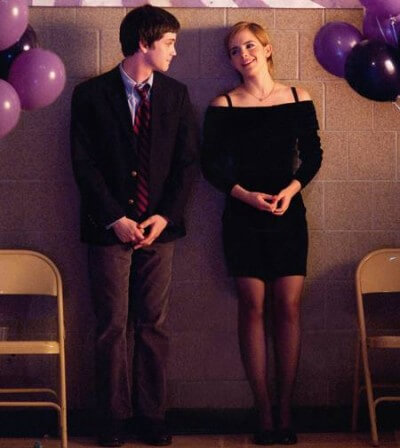 Reconciling the public’s fascination with Emma Watson’s blossoming sexuality with realizing the first time she was on-screen she was 11 years old is really difficult. Doing so in a movie where her character’s sexuality is fundamentally warped because of an experience at 11 years old feels like a pretty clear indictment of said fascination. So if we could take a second from obsessing over the emerging womanhood of someone who grew of age in the spotlight as we do with every starlet, maybe we’d notice that Watson’s performance is the sole reason The Perks of Being a Wallflower works more than it doesn’t.

Based on writer/director Stephen Chbosky’s massively popular coming-of-age novel, The Perks of Being a Wallflower is either brilliant in its accurate portrayal of high-school life in the 1990s or cliched to the point that it feels like freshman-level creative writing, depending on your perspective. Logan Lerman plays Charlie, a psychologically damaged freshman prone to a nebulous and undefined condition wherein he blacks out, sees things and sometimes gets suicidal or violent based on an array of psychologically damaging experiences. Friendless, he is embraced by a step-sibling pair of semi-social pariah seniors: Patrick (Ezra Miller) and Sam (Watson).

Patrick is punished for being a flamboyant and fearless gay teen, while Sam is somewhat shunned for having morphed adolescent sexual abuse into a freshman year “tramp” problem. Out of compassion, the duo brings Charlie into their inner circle of outcasts, which includes Buddhist punk rocker Mary Elizabeth (Mae Whitman) and proto-Goth Alice (Erin Wilhelmi). As dating is wont to do, romance quickly produces fissures in this gang of buds, all the while each of the three main protagonists deal with supremely disturbing levels of psychological trauma.

The first half of The Perks of Being a Wallflower is trite and rather stupid. Films like Super 8 get blasted for trafficking in nostalgia, while coming-of-age stories peddle it wholesale, none worse than the first act of this high-school drama. Indeed, things look nigh-irredeemable until Watson, Lerman and Miller bring their exceptional talents to bear on the never-original material. Lerman, who was once rumored for Spider-man and would have been a better choice than Andrew Garfield, resists the urge to overact and mostly nails a shy leading role. Miller sizzles as the type of brazen and inspiringly self-accepting gay teenage character that is simply not fictionalized enough.

And then there’s Watson. Boy howdy is she something. Even fighting through a sometimes badly concealed accent, she demonstrates her ability to be a non-derivative object of desire while fleshing out a three-dimensional character based on the type of girl we all remember. She is luminous and nuanced, sincere and show-stopping in a performance sure to be overlooked because of her age and the generic J.D. Salinger delusions of the author.

The Perks of Being a Wallflower is the sort of film that will destroy angsty teenagers and new twentysomethings who can still taste their introduction to adulthood. For the rest of us, there’s only a vague sense of appreciation. While this will be the best film of the year for certain folks, for the rest of us, it’s just decent nostalgia fueled by a great performance.