Home » Film » Picking at a Mole 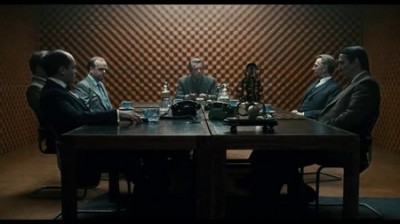 You can tell that Tinker Tailor Soldier Spy, an adaptation of the classic John le Carré novel, is a more accurate depiction of British espionage than James Bond films because instead of rippling abs and shaken martinis, it’s potbellies and comb-overs.  Set in the Cold War, director Tomas Alfredson’s film suggests all that stood between England and the Russkie menace were men who looked like clinically depressed accountants and who spoke solely in monotone. If you like your thrillers sleek and sexy, good God, look away. But if you prefer methodically cerebral entertainment, it’s right up your intellectual alley.

Dense though it may be, there’s really just one mystery to solve: who is the Russian double-agent within MI6? The man tasked with surgically removing this cancerous mole is George Smiley (Gary Oldman), the most unassuming fella to ever wear tweed elbow patches. With the help of Peter Guillam (Benedict Cumberbatch), Smiley primarily investigates four men, Percy Alleline (Toby Jones), Roy Bland (Ciarán Hinds), Bill Haydon (Colin Firth) and Toby Esterhase (David Dencik).

With key information provided by field operative Ricki Tarr (Tom Hardy), Smiley begins to unravel the complex web that allowed the evil, unseen Russian espionage commander, Karla, to plant such a high-ranking traitor. Don’t expect car chases and shootouts, as the most overtly tense moment comes from whether or not a briefcase will be opened. Slow as it may be, things never feel outright dull, as each tiny revelation is a miniature domino falling in a surprisingly satisfying cascade.

For once, the screenwriters (Bridget O’Connor and Peter Straughan) assume the best of their audience, choosing to leave in unexplained jargon, refusing to stop and recap key moments and delivering material that requires some mental assembly from viewers. This is why it’s easier to excuse Alfredson’s laborious pacing, as if it moved any faster, some pieces wouldn’t fit. That said, the moment of the final reveal is a muted disaster. Waiting hours for a confrontation that initially takes place off-screen is a brutal betrayal and a squandered opportunity for a solitary moment of pure excitement.

It’s hard to stay angry with a cast this good, though. Oldman, who is known primarily for his eccentric, scenery-chewing roles, delivers brilliant and careful work. He gets more mileage out of pursed lips and half-smirks than some actors do with clenched fists and bellowed dialogue. Both Cumberbatch and Hardy sizzle in smaller roles, while Firth coyly plies his charms per usual. This is the type of magnificent ensemble-work American actors seemingly resent.

Tinker Tailor Soldier Spy is anti-sexy. It’s cold, complicated and calculated. But the world is so full of Mission Impossibles and 007s, that it’s nice to have an intellectual alternative once and a while. Films like this may never set the box office ablaze, but they are proof that adequately budgeted, mainstream entertainment need not always be condescending or simplistic, and that’s more satisfying than a shaken martini any day.