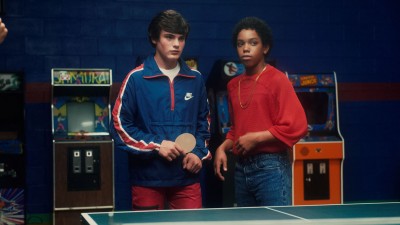 The popularity of Napoleon Dynamite never really made sense. With its “special” characters and nonsensical elements, the film’s inexplicable popularity and elevation to cult classic status always felt unearned. Ping Pong Summer is the movie that Napoleon Dynamite wants to be when it grows up. It is smart, endearing, quotable, nostalgia-inducing and odd in the best possible ways. In an age when it seems like true cult films are hard to find, writer/director Michael Tully has delivered a perfect one.

Ping Pong Summer isn’t just set in the 1980s, it is drowning in it. Run DMC cassettes are in every boom box and the adjective “fly” is used to describe everything from Jheri Curl hairstyles to beautiful girls. Friendless, clueless and obsessed with hip hop, 13-year-old white boy Rad Miracle (Marcello Conte) and his family go on summer vacation in Ocean City Maryland. On the plus side, Rad makes a new friend in Teddy (Myles Massey) and falls for the beautiful Stacy Summers (Emmi Shockley). Unfortunately, he also runs afoul of a privileged, racist bully named Lyle Ace (Joseph McCaughtry) and his ginger sidekick, Dale Lyons (Andy Riddle).

As the title indicates, Rad may have a chance at redemption through table tennis. He’s just not very good at it, as he’s not very good at literally anything. But with the help of town outcast Randi Jammer (Susan Sarandon), he may be able to learn enough skills to crush Lyle, win the girl and do “the worm” in celebration.

Recently, a spate of nostalgic male coming-of-age stories has been unleashed, seemingly in an attempt for current filmmaking adults to revise their personal histories so they get the girls and win the day. Ping Pong Summer does not fit with those. Nor does it fit with the intentionally nonsensical comedies that serve as simple parodies of past culture. There is an earnestness here that somehow amplifies the goofy awkwardness into something downright special.

Ping Pong Summer is one of those films rife with tiny elements that stack on top of one another to win you over. From Stacy’s addiction to the pixie sticks-enhanced “Funk Punch” that keeps her high on sugar to the way Randi looks at Rad and friends like they’ve all been eating lead paint, the film toes the line between self-aware and completely committed to the seriousness of the content. Much of this is owed to Tully, who secured perfectly toned performances from a young cast.

You know a movie is a potential cult hit when you immediately begin quoting the film with friends after seeing it. I’m pretty sure I haven’t sent a text message in the last three days that didn’t include at least one reference to something from Ping Pong Summer. No one could argue that the film has any significance or weight; there’s no deeper meaning to be had here. Just a good time, plenty of laughs, tons of nostalgia for the 1980s and the birth of Radical Miracle, who is everything Napoleon Dynamite wishes he was.