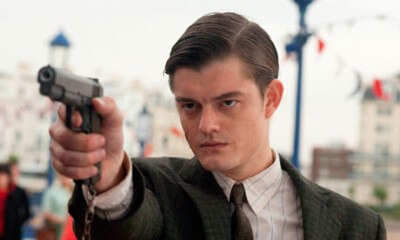 Although writer/director Rowan Joffe’s Brighton Rock, the second attempt at a big-screen adaptation of a 1938 Graham Greene novel, never introduces us to the parents of its sociopathic main character, it’s safe to assume they sucked at child rearing. Maybe genetics alone determined that their offspring would become a brain-bashing, knife-wielding savage, but naming him Pinkie Brown couldn’t have helped.

Brighton Rock is all about Pinkie, played here by Sam Riley, who sort of looks like a paler, younger Michael Bublé. We’re introduced to him precisely at the moment he goes from no-good to evil, when he decides to up his game from petty thug to murderer. Unfortunately, a bookish waitress named Rose (Andrea Riseborough) becomes an accidental witness. When Pinkie introduces himself to her in an attempt to keep her from ratting him out, the two fall in love … ugly, stupid, inexplicable love.

The only explanation we’re given as to why Rose would be ensorcelled by Pinkie’s knife-gashed face and complete absence of charm is that he’s “bad” and she’s “good,” so they’re drawn to each other. This is a remarkably bad foundation for a romantic union. While Pinkie faces off against the violent advances of a competing mob boss (Andy Serkis), he gets drawn deeper into the vile relationship with the deeply religious Rose. Despite the best efforts of the friendly Ida (Helen Mirren) to protect her, the young lass ties Pinkie around her neck like an albatross.

Brighton Rock is a discordant and dour thing, despite being set in Britain in the 1960s during the height of the Mods versus Rockers conflict. From start to finish, the film is relentlessly dark and foreboding, taking place in a world where the only decisions that are made are bad ones. It helps that the actors sell the material so urgently, from Riseborough’s doe-eyed, simple-minded damsel in self-made distress, to Riley’s baby-faced brutality. Mirren, as usual, lends an air of credibility to the whole proceeding, even if her character is fairly useless.

Joffe’s methodical pace joins with some honest, unflashy cinematography to compose an underworld tragedy that may not be transcendent but is far from limp. Oddly enough, the biggest gripe is the funereal score, which pumps copious amounts of macabre into nearly every scene. It all becomes a bit too heavy, even while the film remains largely compelling. And so long as we’re nit-picking, around about the thousandth time Riseborough calls out Pinkie’s name, one feels compelled to make a risky drinking game out of it.

Without knowing how much justice it does to the surely great source material, Brighton Rock is an infrequently captivating minor work buoyed by a few rich performances. It is hell-bent on morbidly driving towards an expectedly ugly conclusion. It’s the sort of film that nobody is likely to watch twice, but few will regret watching once.