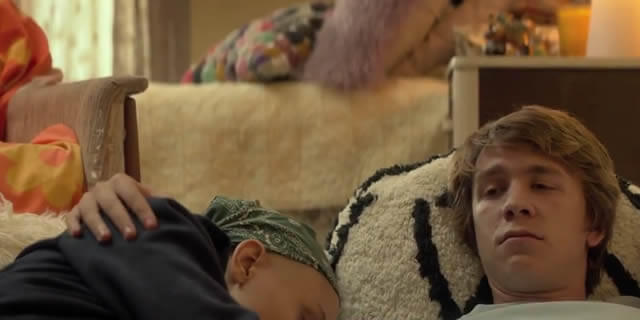 These white privileged coming-of-age indie dramedies that folks salivate over at Sundance almost seem mandatory at this point. We get one every year. In 2012, we got Moonrise Kingdom. In 2013, we actually got a double dose with The Way, Way Back and The Spectacular Now. In 2014, we got Boyhood. This year, we’ve got this behemoth, and it turns the white privileged coming-of-age up to 11.

Director Alfonso Gomez-Rejon’s new film tells the story of a self-loathing, selfish little twerp who befriends a girl with cancer to make himself feel better. Screw this evil movie. Me and Earl and the Dying Girl makes no qualms about shortchanging the more interesting parts of its title—Earl and the Dying Girl—to focus on the brutally by-the-numbers white privileged coming-of-age of Me.

Upon entering his senior year of high school, cinephile Greg (Thomas Mann) has meticulously cultivated a unique position in the social hierarchy that allows him to remain friendly with each clique without maintaining any actual friendships. Greg spends most of his free time with his “co-worker” Earl (R.J. Cyler) developing parodies of classic feature films because this is a quirky indie dramedy, so it’s required to have a least one vehicle for dropping endless pop culture references. All of this overwhelming “meh” characterization begs the question: the cinephile that Greg is, would he even like his own movie?

Shortly after befriending the dying girl, Rachel (Olivia Cooke), Greg gets the idea to make a film for her and the narrative runs on autopilot from there. Greg’s friendships and filmmaking process bring their expected ups and downs; he eventually learns some lessons and is a better person for it. Well, at least we’re expected to believe that he is. The great failing of Me and Earl and the Dying Girl is that the two most interesting characters in the film are kept at arm’s length.

Take Earl, a quiet kid from a rough neighborhood with undeniable filmmaking talent, enough courage to finish a fist fight for his “co-worker” and enough coolness to rock a blue jumpsuit and absolutely kill it. Then there’s Rachel, a teenage girl dying of cancer who is so deeply troubled by the world tiptoeing around her that she descends into depression. These characters are definitely underwritten, but the actors playing them are extremely charismatic (like, saving-this-movie-from-getting-an-F charismatic) and they resonate. Next to them, Greg seems like a brat whose struggle to get a grip on his insignificant “issues” is insanely obnoxious.

Identity politics aside, Me and Earl and the Dying Girl fails on its own terms. As a coming-of-age story, it’s nothing new. As a comedy, it’s not funny. As a drama, it’s not convincing. It’s actually pretty disconcerting to know that we’re going to another movie just like it next year, if not next month. Right now, there’s a beautiful coming-of-age film called Dope playing alongside this hip mess. Give Dope a chance. Kill Me and Earl and the Dying Girl with fire.