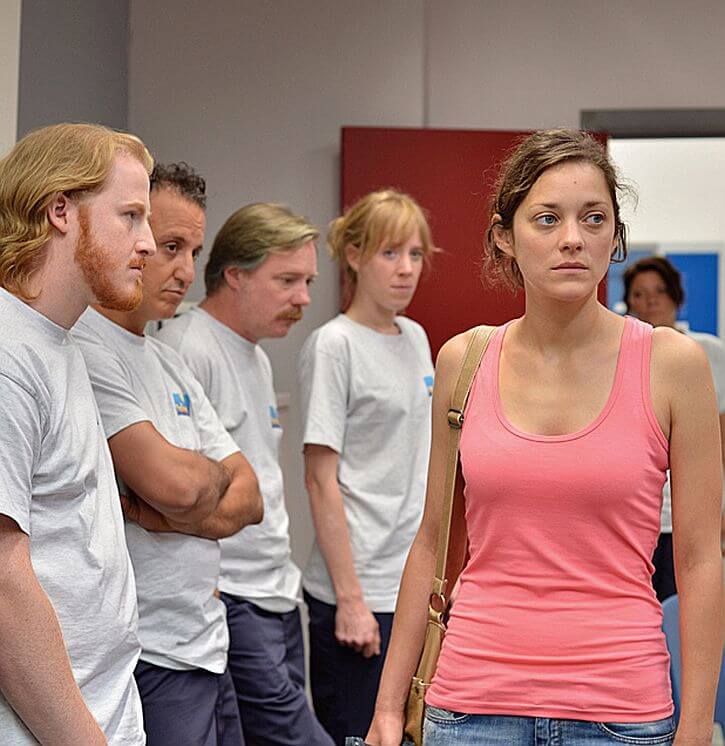 Sit down, Sartre, writers/directors Jean-Pierre and Luc Dardenne get it a bit more right: Hell isn’t just other people. Hell is asking other people to surrender their bonuses so you can keep your job. Two Days, One Night is a harrowing social allegory, a dramatic minimization of a growing socioeconomic reality. The bosses of the world are greedily devouring an ever-expanding amount of wealth, leaving the impoverished to fight each other for table scraps. It is undignified, disgusting and downright heartbreaking to watch human beings alternate between fighting and begging each other for basic survival needs.

The singularly brilliant Marion Cotillard plays Sandra, a wife and mother who wishes to return to her job after having taken leave for a crippling bought of depression. We’re not talking sadness here; we’re talking panic attacks that strip speech and spark suicidal ideation. Her boss, having discovered that 16 people can do the work that 17 people were doing, gives his staff a choice: They can keep their bonus or surrender it and hire Sandra back.

Two Days, One Night refers to the amount of time that Sandra has to go door-to-door begging her equally struggling workmates to give up desperately  needed bonuses so that she can provide for her family. You think you know shame until you watch a woman internally retching as she asks downtrodden friends to take from themselves and give to her. After every “no,” Sandra tells her husband, Manu (Fabrizio Rongione), that she can’t go on, she can’t ask another colleague to do this. At one point, when she asks two coworkers at the same time, the two men get into a physical altercation about it.

Forget the collateral damage of most major blockbusters, the stakes here are simultaneously intimate and massive. This is life or death to Sandra and her family, and she’s a woman desperately patching the hull of her psyche with massive doses of Xanax. Cotillard is goddamn brilliant again, refusing to play Sandra as weak-willed or melodramatic. She endows this character with so much grace, so much bravery and quiet strength that it’s devastating and inspiring to watch.

If the film has a flaw, it lies in its repetitive nature. Instead of seeking votes from more than dozen people, Two Days, One Night would have been better served with deeper interactions between Sandra and half that number. Manu is also woefully underdeveloped, never coming into focus as either a truly supportive and loyal husband or a pitying spouse burdened by his wife. Sandra initially alleges the latter, but it’s never clear if that is her depression talking or actual insight.

Two Days, One Night is a lot like Steven Spielberg’s War of the Worlds. For real! Both movies show the consequences of global destruction playing out in just one family. Sure, Spielberg had giant aliens while this film only has the specter of economic disparity. But to be honest, if forced to choose which were more evil, intergalactic murderers or CEOs, the answer isn’t obvious…