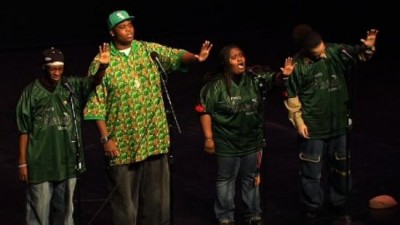 Although awarded points for its use in wooing the opposite sex, poetry has long carried a cool index below the cultural Mendoza line. Emotionally resonant? Yes. Culturally significant? Sure. Bad ass? Not so much.

Things began to change in the mid 1980s, when Chicago’s Marc Smith created a “poetry slam,” a competition in which writers battle each other individually or in teams using spoken word. Judges score each poem from 1-10. If the subjectivity of gymnastic scoring is mild lunacy, grading three-minute artistic emotional revelations would seem to be rabid stupidity. But the crossbreeding of competition and creative writing has birthed a hybrid that carries a cache of cool and has allowed poetry to track down and ensnare those who would otherwise have escaped.

Louder Than a Bomb is a documentary that shares its name with the largest teen slam poetry competition in the United States. Directors Greg Jacobs and Jon Siskel follow charismatic teenagers from various teams over the course of one competitive season, culminating in an epic verbal throwdown, the “Wrestlemania of youth verse,” if you will.

In addition to featuring fantastic poems written by people who simply have no business being that insightful about the human condition at their age, the documentary evenly balances narratives about its subjects and the actual contest itself.  The competition often serves as a validation for the otherwise ignored. These include people like Nova, a beautiful poetess who uses spoken art to publicly grapple with a fractured family and the stress of practically raising her special-needs brother; Nate, whose mother is a recovered drug addict; and Adam, who comes from a loving home that blessed him with excess kindness he just wants to share.

Because it follows teens from several different teams, not all can be winners, which is actually nice. In avoiding clichéd Rocky-isms, Louder Than a Bomb reinforces what the hosts of the slam poetry contest bark over and over again: “the point is the poetry” and not the points the poetry scores.

I know firsthand the transformative power of activities like this, having spent time observing the Omaha slam scene and having coached competitive speakers for more than a decade. Louder Than a Bomb captures the inexplicable magic that occurs when the seemingly least likely candidates reach for something like poetry as a lifeline, seize it and climb to heights unimaginable. It is a rare majesty too few people get to witness. Until now.

On Friday July 29, Film Streams at the Ruth Sokolof Theater (filmstreams.org) will host a Q&A with director Greg Jacobs after a screening of the film.