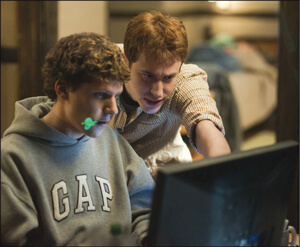 The Social Network shows smarties suck Whether owed to a ritual goat sacrifice or a cauldron-cooked potion, mastery of the dark arts is the only way Aaron Sorkin’s script about an insufferable prick compelled by hubris and hormones to create a website out of spite could sizzle like an unpoked hotdog in the microwave. Although The Social Network is surfing atop a hyperbole tsunami that’s included Citizen Kane and Godfather II name-checks, it is several degrees short of a full-on revolution. Brilliant but slightly contrived, let’s just say there’s a reason why Facebook doesn’t have a “love” button. If the real Mark Zuckerberg (Jesse Eisenberg) even approximates the vengeful narcissist Sorkin invented from Ben Mezrich’s nonfiction book The Accidental Billionaires, the screenwriter can expect to get Zucked at some point. We meet the soon-to-be social media pioneer mid verbal spar with his soon-to-be-ex-girlfriend, Erica Albright (Rooney Mara). It takes all of four sentences to drink in the entirety of his person as Sorkin sees him: He’s desperate for people to revere him, unquestionably brilliant and a Defcon Level 1 asshole. The spine of the nonlinear story is composed of two lawsuits. The first was brought by Zuckerberg’s Harvard classmates Divya Narendra (Max Minghella) and twin brothers Tyler (Josh Pence) and Cameron Winklevoss (Armie Hammer), who alleged Facebook was stolen from their idea for HarvardConnection. The second, and far more emotionally loaded, was leveled by Eduardo Saverin (Andrew Garfield), Zuckerberg’s first investor and only friend. The film flashes back and forth from depositions to the drunken, revenge origins of Facebook to the expansion of the site through the involvement of Napster creator Sean Parker (Justin Timberlake). It’s all so damn engrossing you barely notice nothing inherently interesting happens. Part character sketch of a bitter, smug louse, part reflection on the rise of geeks to the top of the corporate food chain, The Social Network is perfectly cast. From Eisenberg’s squinty, snark-spewing to Timberlake’s charismatic abhorrence, director David Fincher inherited so much in terms of talent and writing, he likely just ensured the camera was still recording and went to lunch. Even the low-growl score by Trent Reznor and Atticus Ross operates like an angry, well-oiled machine. Sorkin’s manipulation is so complete that he renders sympathetic the privileged Winklevosses while simultaneously making Zuckerberg, the little guy, into a douche Goliath. By the time the saintly Saverin is sabotaged, the audience doesn’t know whether to root for their central antihero or hope for a back alley shanking we know won’t happen. Without ever pandering, Zuckerberg’s tiny comeuppance is as sly a subtle scene as a script has seen, involving a desperate refreshing of a webpage. Masterpiece status is dodged thanks to the barely-a-whimper resolution and the fact that most of the zeitgeist commentary isn’t actually inherent within the film but is loaded on externally by smart observers. And there’s nothing wrong with that. The Social Network never nears Orson Welles’ orbit, but that’s not an insult. It should be content to sport the year’s best script. It’s a very good movie about programming a website. That’s accomplishment enough. GRADE: B+