The 13th Omaha Film Festival projects March 6-11 at Village Pointe Cinema with its eclectic mix of indie fare from around the world. But a film by Omaha native Dan Mirvish brings things home for area cineastes.

The fest’s opening and closing night films are prestige feature-length studio releases with big name stars: Borg McEnroe at 6 p.m. on March 6 and Beirut at 5:30 p.m. on March 11. The March 10 OFF Conference includes guest panels on Documentary Filmmaking, Writing for Pixar and Filmmaking in Nebraska. The March 11 Writers Theatre showcases live readings of scripts.

Mirvish, an L.A.-based director, will be at a 3:30 p.m. March 10 screening of his new narrative feature Bernard and Huey, whose script is by Pulitzer Prize-winner Jules Feiffer. The presence of indie veteran Mirvish, who co-founded Slamdance, is an important gesture for the local filmmaking community. He’s not only “one of our own” bringing back a well-reviewed new work with serious pedigree, but he’s emblematic of the inventive, resilient spirit that animates the indie industry.

The resourceful Mirvish is the author of The Cheerful Subversive’s Guide to Independent Filmmaking, an irreverent yet practical compendium of lessons learned over his 25-year filmmaking career.

Every Mirvish film – Omaha – The Movie (1995), Open House (2004), Between Us (2012) and now Bernard and Huey (2017) – has been an object lesson in opportunity meets accident meets persistence meets imagination. He cobbles together micro budget projects financed by friends and family, doubling locations and stealing shots in guerilla-style fashion.

How he came to make his latest took things to new extremes. The original script went unproduced when Feiffer wrote it decades ago. Then it vanished. Mirvish long admired his work as a cartoonist and scenarist. Feiffer’s adult cartoons in The Village Voice, The New Yorker and Playboy were hipster reads, Also a respected playwright (Little Murders), he adapted an unproduced play for what became the acclaimed Mike Nichols’ film Carnal Knowledge. He adapted Murders for Alan Arkin. He penned Popeye for Robert Altman.

Mirvish went to some lengths to track down the elusive script inspired by an old Feiffer cartoon series. The protagonists are similar to the lifelong male buddies in Carnal Knowledge, only these misogynists navigate a post sexual revolution-feminist age.

Just finding a copy of the script proved daunting as most players involved in trying to get it made decades earlier were dead. Upon rediscovering and reading it, Mirvish fell in love with the material.

“I thought it was a great satire on masculinity and men behaving badly. Kind of timeless characters and even more so now a timely theme,” Mirvish said. “I thought it was very funny and similar to my sense of humor.”

Even after securing the property and Feiffer’s blessing to develop it, lawyers had to clear rights. All this took time. Meanwhile, Feiffer was anxious to see a film finally realized from the script and was in no mood for delays or misfires this go-round.

“Once we got the rights cleared away jules was like I’m 87, let’s make this thing already.”

He knows things could have gone wrong to sabotage the project but he never lost faith it would work out and, more importantly, he never let the process defeat him.

“I have fun with the process and that’s kind of what I say in the book. Look, if you’re not having fun doing all the stages of the game then you shouldn’t play because, you know, making films is not an intrinsically fun process all the time. It’s studded by long bouts of boredom, anxiety, stress and failure, so if you’re not finding the joy in that somewhere along the way, you probably shouldn’t be doing it.

“When it comes to casting, for example, other filmmakers may complain, ‘Oh, it’s a Hollywood game these agents are playing.’ Yeah, it’s a game and you should have fun playing it, too, and you just have to play it better than they do, and that’s kind of how you have to look at the whole process. Yeah, there’s going to be challenges and downsides to everything but as long as you’re having fun during the other moments. it’s worth doing. That’s my attitude.”

Mirvish also takes satisfaction in having “hung in there” to do what it took to get it made. 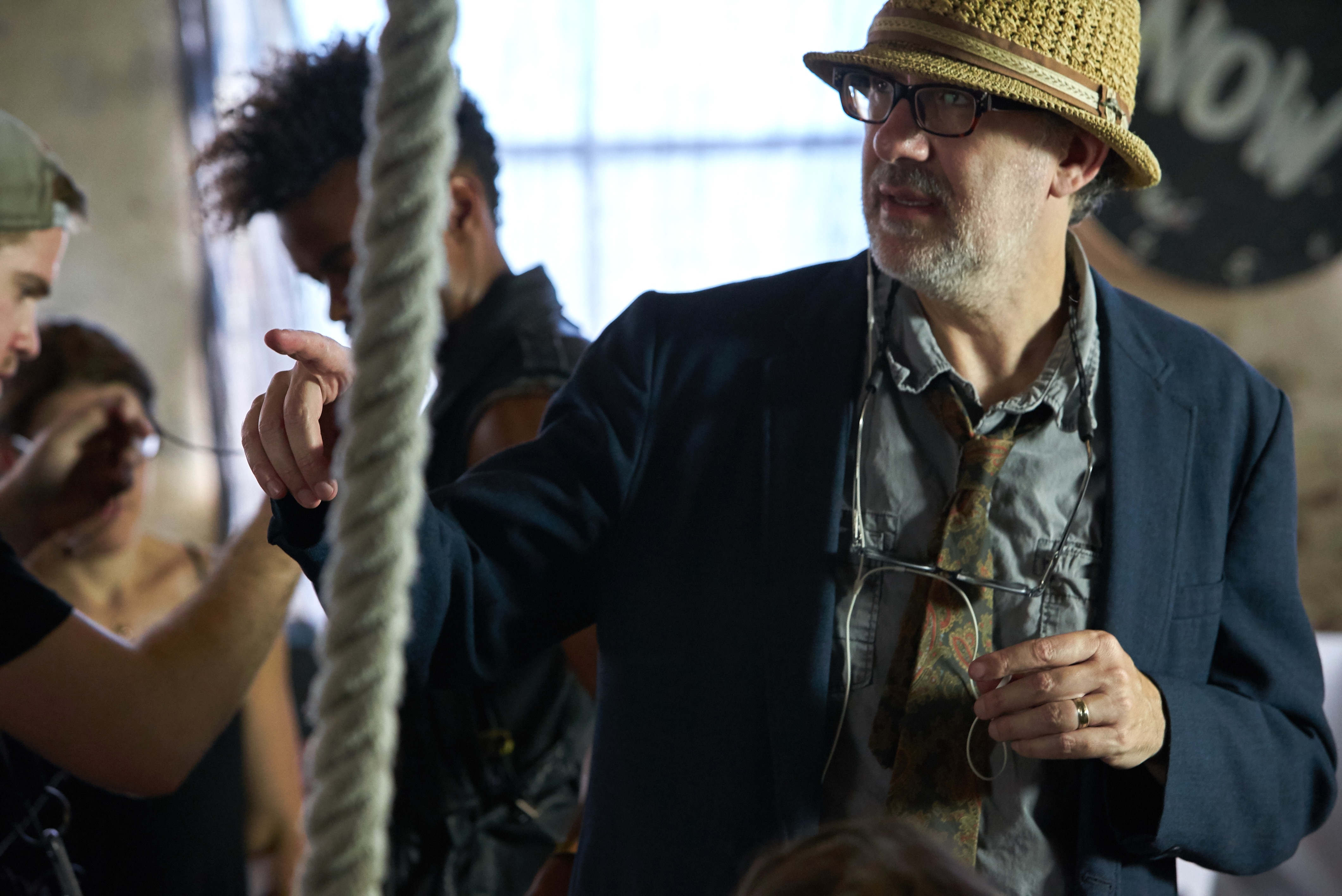 “When we were able to finally sign all the paperwork, then it really was off to the races. We had our Kickstarter campaign up within two months and were casting and financing and getting the film together. From that point it was actually a fairly quick process.”

“Dana remembered Feiffer on the set of Popeye because Dana worked on that movie (for his grandfather Robert Altman), so there was that connection.”

Only minimal script changes were made.

Mirvish has a knack for attracting name talent to his little films and he did it again by getting two hot comedic actors: Jim Rash (Community) as Bernard and David Koechner (Anchorman) as Huey. Mirvish enjoyed having two leads with strong improv backgrounds: Koechner with Second City and SNL and Rash with The Groundlings. Rash is also a writer.

“It was just great having them around in rehearsal and then on set. We did four days dedicated to rehearsal, which is pretty rare even on a studio film.”

“Once we cast David and Jim, we had to look for younger versions of them, so we had an open casting call and we found these two terrific actors. The young guys really shadowed the older guys. That was a great experience for all four of them. They really developed this kind of big sibling-little sibling relationship and kind of picked up each other’s little quirks and things.

“Jules and I talked about how it wasn’t about the physical look of these characters. They didn’t have to look like the cartoon. We met with many actors who didn’t. Ironically, Rash and Koechner look almost exactly like the cartoon characters – next to each other especially. In the end credits you see some original Feiffer cartoons. It’s nice to see what these guys are supposed to look like and they really kind of do. I mean, to the point when Feiffer first saw Rash he was like, ‘He’s great, but couldn’t you find someone more handsome?’ because Bernard was always an autobiographical dopple-ganger for Feiffer himself.”

Mirvish grew fond of the eternally clever and young Feiffer. He’s pleased that “Jules really liked the movie and was very happy with the casting.” Feiffer remains prolific at 89. He just finished a new graphic novel and had a new musical open. “For a man of any age, he’s hard to keep up with. It’s a lot of fun whenever I see him because he’s always got these amazing stories.”

Mirvish shot interiors in L.A. and exteriors in New York.

The film has a domestic distribution deal and awaits a foreign sales deal.

Mirvish hopes to return with the movie in the spring at the Dundee Theater – his neighborhood cinema growing up.

For complete OFF details, visit omahafilmfestival.org.