Home » Film » Re-enrolling in the Aisles 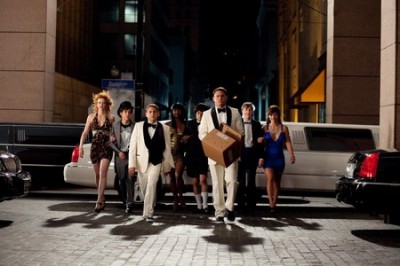 Around the time when Deputy Chief Hardy (Nick Offerman) goes off on a whisker-thinly veiled diatribe about the death of original thought and the lazy recycling of past ideas that kinda sucked to begin with, you realize 21 Jump Street knows how terrible it should  be. In the subsequent scene, when Captain Dickson (Ice Cube) delivers a rousing rant about familiar cliches that ends with the message “embrace your stereotypes,” you realize that not only is this movie not terrible, it may actually be (gulp) sorta hilarious.

Because overhype has been the death of many a fine comedy, do not think that 21 Jump Street will render you colostomy bag-bound, having burst your bladder in Gallagherian fashion. Indeed, the trappings are still lame. Schmidt (Jonah Hill), the nerdy smart one, and Jenko (Channing Tatum) the ab-tastic dense one, reunite in the police academy after having been quasi-adversaries in high school. Because Schmidt is allergic to physical activity and Jenko is allergic to thinking, the duo buddy-up to get through training, only to discover they make  trainwreck-alicious cops.

Because they look so young (they don’t), they get busted down (somewhat promoted) to a totally believable (absolutely ridiculous) special assignment (script gimmick). They must infiltrate a high-school and stop the spread of a new drug, which is sold by a caterpillar-eye-browed student named Eric Molson (Dave Franco). Schmidt and Jenko must ingratiate themselves with a new breed of eco-friendly, Berkley-bound popular kids in order to find their supplier. Oh, and there’s a cute girl named Molly (Brie Larson) that Schmidt likes and a teacher (Ellie Kemper) who wants to ride Channing’s Tatum.

The script, written by Michael Bacall and Hill, is just this side of clever, with a few inspired set pieces and a deliriously enjoyable climax. But the real credit goes to directors Phil Lord and Chris Miller who kept a firm enough grip to keep this from slipping into slapstick-ville but had a light enough touch to tickle the goofy. The tongue-in-cheek winks at action movie cliches butt up against Hill doing what he does best and Tatum showing he’s somewhat capable of doing more than glowering and smoldering.

But the most surprising thing about 21 Jump Street is its affirmation of a truth not often embraced in high-school movies: high-school sucks…a lot. The film is unafraid to posit the theory that the time when your personality is half-formed and romance feels like life and death is the absolute friggin’ worst. The average-at-best bromance at the center has been praised for its sweetness, but the savage take on the teenage years is the most delicious.

The funniest joke may involve mutual manual vomit stimulation but the fact remains that 21 Jump Street has more going on under the hood than it has any right to have. Again, this isn’t to say it will redefine hilarity in your personal dictionary but it is inexplicably entertaining and doggone enjoyable. If only all remakes and reboots were this amiably innocuous.