Home » Film » Revenge of the Baby-sat 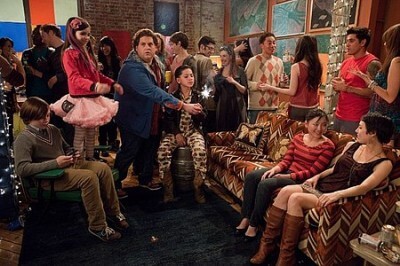 For a movie that judiciously “borrows” from a marginally beloved 1980s Elizabeth Shue movie, The Sitter somehow feels like a Vh1 countdown special on “overused comedy beats from the 2000s.” This is “kitchen sink” comedy at its most uninspired, as writers Brian Gatewood and Alessandro Tanaka empty out their reserve of go-to staples such as “white nerd impresses cool black folks,” “running from wacky but murderous drug lords” and copious amounts of crotch violence. While familiarity can sometimes aid in comedy, hackneyed gags played out without imagination feel less like entertainment and more like punishment at a certain point.

Jonah Hill plays Noah Griffith, the latest in his legion of sass-mouthed, man-child slackers. We’re introduced to Noah as he performs unreciprocated oral sex on his semi-girlfriend, Marisa (Ari Graynor). This is meant to remind us that we’re watching a “no-holds-barred, R-rated romp,” but it actually only serves to remind us that the creators have no idea how to make such material amusing and not awkward. Because he feels guilty for sucking at life, Noah agrees to babysit for his mother’s friend, even though no one should trust him with the care of anything alive.

The kids are all predictably wacky. There’s Blithe (Landry Bender), who dresses and acts like a “celbu-tant,” in case you were afraid there wouldn’t be dated Paris Hilton references. There’s Rodrigo (Kevin Hernandez), an adopted boy from El Salvador who loves blowing things up. There’s Slater (Max Records), who suffers from anxiety, the cause of which is as painfully obvious as it is painfully written. When Noah decides to take the kids with him to buy cocaine for Marisa, he runs afoul of eccentric drug kingpin Karl (Sam Rockwell) and puts the children in danger, because nothing says comedy like child endangerment and drug abuse.

It’s hard to pinpoint what has happened to director David Gordon Green. He really burst onto the scene with Snow Angels, a brutally emotional and exceptionally artistic endeavor. His last two movies have been Your Highness and The Sitter, which were both brutally unemotional and exceptionally unartistic. There’s just no spark, no life to anything going on here. Contrast this with the director’s best comedic work, Pineapple Express, and it’s hard not to conclude he has backslid into hack-ville.

And then there’s Hill, whose recent weight loss may make The Sitter his last “chubby guy falls down a lot” feature. Unlike other overweight yucksters like Jack Black, Hill’s comedy has always been more derived from his mouth; his sarcastic and mean-spirited quips are his signature. Here, he’s forced to try becoming sensitive, somehow healing the psychological issues found in each of the slightly damaged kids. Not only does it not work, those scenes practically implode, taking the film down with it.

The Sitter is pretty wretched. With nary a fresh sight gag or clever twist of events, the film fades into oblivion before the credits even roll. Here’s hoping that the newly slim Mr. Hill can convince his struggling buddy Mr. Gordon Green to join him on his quest for self-reinvention…for all our sakes.