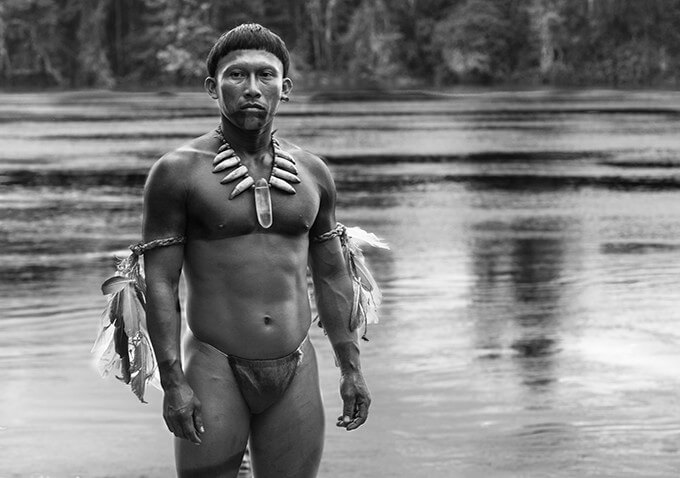 2016 has been a terrible, horrible, no good, very bad year for films; so it totally makes sense that one of only two truly great films I’ve seen this year actually came out last year. Embrace of the Serpent, the Colombian nominee for Best Foreign Language Film at the 88th Academy Awards, has finally made its way into the area. And it’s stunningly almost as good as everyone claimed. For the third time since Mad Max: Fury Road blessed us with Furiosa, almost a year ago now somehow, another great film gets bonus points for featuring a breathtakingly original and jaw-droppingly badass protagonist.

Karamakate, a solitary shaman living deep within the Amazon region of Columbia, is facing a dilemma: letting his tribe’s culture die with him or letting outsiders preserve increments in perverted forms. Director Ciro Guerra follows Karamakate in 1909 and 1940, played by actors Nilbio Torres and Antonio Bolivar, as he leads two different scientists downriver toward the same legendary plant. Besides Karamakate, Embrace of the Serpent is solid on its own, but featuring a killer protagonist takes “serpent embracing” to the next level.

After years of living alone with nothing but survivor’s guilt of being the last member of his tribe, Karamakte has little patience for the interlopers seeking to expose his culture’s “greatest knowledge” for their personal gain. Torres and Bolivar create a character that is charismatic, regal, cunning, fierce and every other positive adjective that you can use to describe a protagonist that is a decent synonym for “just plain awesome.” Even part of the reason Karamakte makes for such a good guide downriver is because other tribes like him so much.

Besides Karamakte, Embrace of the Serpent is pretty traditional “Heart of Darkness” stuff. However, it’s very, very good traditional “Heart of Darkness” stuff. Filmed almost entirely in black and white, a creative choice that feels gimmicky more often than not, Guerra only misses a few beats here and there. The underlying tension built throughout the film never quite pays off, and it definitely overstays its welcome a bit. But these flaws don’t come close to truly compromising the experience. Even the black and white cinematography isn’t totally wasted as a clever cinematic tool.

The best sequence in Embrace of the Serpent explores a tribe that Karamakte says has become “the worst of both worlds.” Unfortunately, it’s out of place in a film this quiet. I appreciate that every “Heart of Darkness” story must have that moment where it goes off the deep end and really descends into hell; but this one doesn’t fit. That being said, as a standalone scene, it’s a freaky descent into hell that’s masterfully done. You will almost certainly watch it through your fingers. Still, it’s the only pit stop along the journey downriver that feels misplaced.

None of these issues amount to much because, again, bonus points for Karamakte. He’s one of the best characters in months and any time spent with him is time well spent. Embrace of the Serpent has its flaws, but so do some of my favorite films. Just because a piece of artwork isn’t perfect, that doesn’t mean it isn’t great.