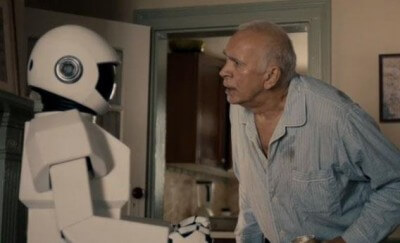 First things first: although she’s only eight years younger than him, nobody will accept that Susan Sarandon would want to kiss Frank Langella on his mouth parts. That premise requires a bigger suspension of disbelief than the rest of Robot & Frank, which presumes the world now has robotic versions of Mr. Belvedere.

Writer Christopher D. Ford and director Jake Schreier have composed a quiet little symphony about dementia and caring for the elderly wrapped in a clever conceit. Of course, this means that while there are moments of sweet tenderness that will make you smile, you will ultimately leave feeling kind of like crap, knowing the sad reality of the struggle the aged have with retaining memory. This isn’t a shortcoming of the film so much as a shortcoming of life, but it’s a pretty big bummer to be reminded about nonetheless.

Langella stars as Frank, a former thief who now lives in a spacious house alone, while his daughter, Madison (Liv Tyler), is flitting about the globe and his son, Hunter (James Marsden), is busy trying to give his children the father he never had. Frank’s only companion, if you want to call her that, is the still-lovely-after-all-these-years Sarandon, who plays a kindly librarian named Jennifer. With Frank’s mental health in decline and Madison nowhere to be found, Hunter buys his dad a robot caretaker as a substitute for putting him in a nursing home.

The surly Frank detests his cyber-nanny until he realizes that it has no legal parameters. In other words, after decades out of the game due to his old age, Frank now has a burglar buddy, albeit one that runs on batteries. When rich yuppies move into town, the odd duo set their sights on a major theft, unprepared for the involvement of the authorities and the fact that the robot can’t turn off his recording device, providing nonstop evidence. This all culminates in low-speed chases and sentimental goodbyes, the kind that kick you right in your heart’s groin.

Langella’s performance has received much praise, but he’s basically just playing a sad-eyed curmudgeon that is virtually indistinguishable from much of his other work. He’s certainly compelling, but the emotional blows come from the audience’s personal experiences dealing with elderly loved ones. Ford does well to include clever character beats, like Madison’s political opposition to “robot slave labor” and Frank’s Cool Hand Luke-style reaction to law enforcement. But when one of the two major roles is played by a monotone computer intentionally devoid of as much personality as possible, it never quite congeals.

The result is a sometimes moving, sometimes mildly overstated character sketch that carries the emotional weight that the audience brought in with them. And given the increasing toll that the Baby Boomer generation will be placing on their children, due to advances in medical technology that allow for such longer life, there’s a good chance most people are carrying some of this with them. Robot & Frank is, at the very least, a reminder that we ought not pass off those we love onto glorified Speak and Spell.