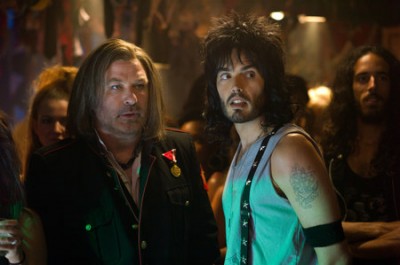 Let’s not do this, okay? Let’s not use nostalgia to forgive the unspeakable things we did to fringe, denim and the musical scale in the 1980s. Other than the 1985 Chicago Bears and that time Michael Jackson’s hair caught on fire, there is nothing even worth remembering about that shameful decade, when men were Men at Work and women jazzercised.

Rock of Ages nearly realizes that those 10 years were a collective joke that the United States played on the rest of the world. At times, this adaptation of the hit Broadway show understands that it should be, nay it needs to be a comedy. But every time it seems like director Adam Shankman is about to embrace the laughs, we’re treated to more of a schmaltzy love story. Look, nobody did “love” in the 80s. They did cocaine and terrible things with hairspray.

Julianne Hough plays “girl who is new to Hollywood,” while Diego Boneta plays “boy who dreams of making it big.” The two meet and have what appears to be a deep relationship filled with tons of memories in the span of no more than six days. We know this is the time frame because the moment Dennis Dupree (Alec Baldwin) reluctantly hires her as a waitress at his legendary club, he informs her that Friday is their biggest concert ever: Stacee Jaxx (Tom Cruise) is coming. Think Axl Rose with the whacked out pseudo-religious beliefs of…well, Tom Cruise.

At the behest of his manager (Paul Giamatti), Stacee is leaving his band to go solo, and their last show is the only hope Dennis and his partner Lonny (Russell Brand) have of keeping their club open. With a new mayor (Bryan Cranston) and his ample-chested but feeble minded wife Patricia (Catherine Zeta-Jones) trying to “clean up the strip,” the big show is their only chance to save the summer camp, er, music club. Oh, and somewhere in the middle of all of this, Cruise finds the time to warble karaoke into Malin Ackerman’s vagina.

The music of Poison, Mr. Big and Twisted Sister is given the full “Glee” treatment, as songs are mashed together and Disney-fied, which would be depressing if they weren’t already terrible to begin with. What’s astonishing is how ugly everything looks. Musicals are confined by a stage, but movies are not; Moulin Rouge is the only one that figured that out. Shankman gives us claustrophobic sets and hideous close-ups, which is fine when it’s Hough but distressing when it’s Baldwin in a Nic Cage wig. Even the audio seemed out-of-synch, making the actors look like lip synchers, which is not what you want in a musical.

It’s kinda fun to hear Cruise try and sing, sorta entertaining to watch Hough dance and unbearable to watch Boneta act. In a summer that already features two cinematic crimes against humanity, this is too benign to rate. Really, it’s kind of like the songs it uses: mildly pleasant at best and utterly insignificant.

One more thing: “Don’t Stop Believin’” is a fine song. It is not, however, the grandest accomplishment of the human race. Let us stop behaving as though it is a hymn handed to us from the divine. If Rock of Ages has a legacy, let it be that.