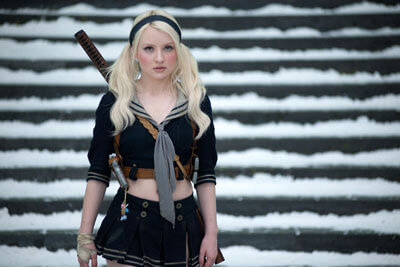 The tagline for Sucker Punch is “You will be unprepared.” Eh, not so much. Every trailer for the film showed copious slow-motion sequences of girls clothed as if nerd fetishists established a global dress code. The near-dialogue-free previews gave little-to-no impression as to how the hell these seemingly disconnected visual sequences, ripped from a hardcore gamer’s wet dreams, possibly fit under one narrative umbrella. Having watched the whole thing, which is oddly reminiscent of “Little Orphan Annie” as told by a peyote abuser, it’s safe to say that we were, in fact, quite prepared.

Writer/director Zack Snyder has been described with a bevy of terms, from “visionary” to “auteur.” It’s unlikely that “feminist” will be added to that list. To be fair, his wife, Deborah, did help produce Sucker Punch , and there is some kind of hazy, middling message about how women are best when working together to fight back against evil men who think solely with their ding dongs. But when your characters are only assigned stripper names, like Baby Doll and Sweet Pea, and dress like what Penthouse magazine would consider business casual, even when fighting dragons, it’s safe to say empowerment ain’t the real point.

So what is the point? Awesome, gob-smacking visuals that are flat-out divine. What is seen is so much more important than what is told through spoken words that the film’s entire conceit is presented only in a silent, slow motion montage. Here’s what can be pieced together: Afte her mother’s death, Baby Doll (Emily Browning) is framed for murdering her sister by her wicked stepfather and is shoved into a mental institution. Once there, reality becomes increasingly subjective.

She may or may not have met the following fellow inmates: Rocket (Jena Malone), a feisty runaway; Sweet Pea (Abbie Cornish), the eldest and the group leader; Blondie (Vanessa Hudgens), who is not blond; and Amber (Jamie Chung), who is not interesting. Baby Doll dreams or hallucinates that she is not in a mental hospital about to get a lobotomy, but that she is in a burlesque-y whore house where the aforementioned girls are all dancers and are treated like slaves. Under the guidance of Madame Gorski (Carla Gugino), who works for brutal boss Blue (Oscar Isaac), the girls quickly discover that Baby Doll’s dancing is stunningly hypnotic. However, all we get to see of said hypno-dancing is a few seemingly drunken sways.

This is because every time Baby Doll dances, she is taken into another fantasy realm where a wise man (Scott Glenn) tells her to do insane things like steal fire from a dragon’s throat or stop an army of undead, steampunk Nazi zombies. Luckily, she is aided in that dream world by her whore-house-mates. If it sounds like incomprehensible gibberish, that’s because the fantasy on top of the fantasy on top of reality feels like Inception as retold by a toddler on cough syrup. This unnecessary over-complication serves the story in no significant way and apparently was only done to frustrate synopsis writers.

Snyder is a cinematic Moses who parts the Red Sea of audiences. If you’re a fan of his style, this is as close as you’ll get to crawling through his ear hole and seeing how he sees. The kinetic, abstract and original action sequences are unparalleled in their brilliance. And there’s the rub: It so perfectly nails the visual half of moviemaking that it’s hard to dismiss Sucker Punch as a failure. We are quick to reward exceptionally well-scripted films that look blah, but slow to praise a blockbuster that’s brain-dead but beautiful. The latter combination may not make for a good human being, but it’s more than enough to warrant a recommendation. Go see Sucker Punch .