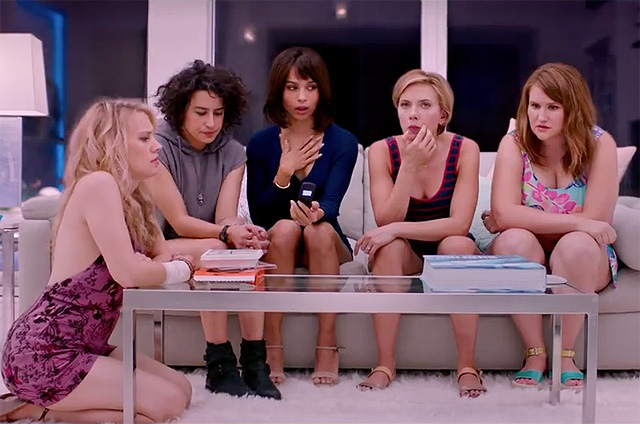 Maybe it was the way Kate McKinnon’s hyperbolic Australian accent hilariously tortured the word “pizza” until it simultaneously had between one and seven syllables. Maybe it was Jillian Bell twisting foot fetishes into nonverbal punchlines. Maybe it was the most-adorable meth-fueled gas-station-bathroom oral-sex encounter ever imagined. Whatever it was, at some point, Rough Night became downright relentlessly amusing. Devoid of any major “OMG, did you see that?!” individual scenes of epic shenanigans, the film is a cavalcade of “chuckle-funny” amusement featuring folks who would already be mega-famous, franchise-launching movie stars if only they had penises.

As the best comedies do, Rough Night’s plot is a simplistic skeleton from which to hang meaty jokes. Jess (Scarlett Johansson) is a straight-laced candidate for state senate who goes to Miami for her bachelorette party with her college besties. Alice (Bell) is the maniacal ringleader, Frankie (Ilana Glazer) is an unemployed social activist, Blair (Zoë Kravitz) is a divorcing socialite and Pippa (McKinnon) is Jess’s Australian buddy from her semester abroad.

The group does cocaine and accidentally kills a dude, activities that are illustrated on the official state flag of Florida. While Jess and her co-conspirators contend with a lecherous couple (Demi Moore and Ty Burrell) and attempt to dispose of the body, Jess’s fiancee (Paul W. Downs) begins a misguided quest to find her. That quest blissfully involves adult diapers and the music of Marilyn Manson.

Director Lucia Aniello, working from a script she co-wrote with Downs, gives her comedians room to yuk while never letting things meander or stagnate. Only Johansson seems ill-at-ease; her performance is caught in the hallway between drama and caricature, which is objectively the single most cringe-worthy place to stand exposed. It doesn’t help her that McKinnon, Bell and Glazer are gifted with the ridiculous ability to turn the most mundane explanatory dialogue into a riotous riff. There is no price tag too high to pay for a buddy cop spoof with any of that trio playing a pair of detectives and a villain.

The movie eschews expected set pieces and over-the-top spectacle in favor of a higher giggles-per-minute ratio. This means folks won’t walk out of the theater recapping the same 2-3 moments to other people who just saw the same thing. It also means that the film doesn’t immediately feel as funny as it actually was. Most comedies rely on only a few gut-busters and fill time between mega-gags with boring gibberish. Rough Night never engages in “I can’t breathe” hilarity, but it’s also never slow, boring or laugh-free for long.

What’s more, Aniello and Downs play wonderfully with gendered conceits, particularly in scenes of the concurrent bachelor party. Listening to Eric André decry sexual expectations or Bo Burnham give loving encouragement somehow only makes Bell’s “lethal horniness” and McKinnon’s unhinged energy that much more effective. Rough Night isn’t a comedy classic nor a “game changer” for the format. But considering the comedy genre seems to have cooties lately, with few studios wanting to play with it at all, it’s nice to have something to laugh at for a minute.