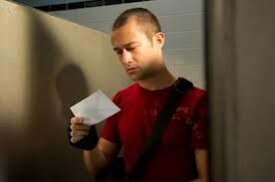 Here in ‘Murica, when we watch cars go round in circles while Kid Rock’s “Bawitaba” plays in the background, we have the decency to let the walking billboards who are driving vehicular billboards have a roof on their car. That way, they only die sometimes, as opposed to Europe’s Formula 1 circuit where they die all the freakin’ time. Formula 1 was created by people whose first attempt at creating a sport was “cover yourself in honey and punch a bear.”

Director Ron Howard and writer Peter Morgan ask a good question with Rush, which is: What kind of broken human being straps themselves to a rocket coffin? To investigate, they turned to the sport’s greatest rivalry between Niki Lauda (Daniel Brühl) and James Hunt (Chris Hemsworth). The movie was made in collaboration with Lauda, so the only purely fictional elements are Hemsworth’s abs. What’s interesting is that Morgan and Howard have created a rare sports movie that bucks the formula: you simultaneously root for two competitors.

Hunt is a reckless, womanizing boozehound while Lauda is a walking incarnation of precise Austrian engineering.  For Hunt, the exhilaration of peeing on death is the ultimate high; for Lauda, possibly dying is a regrettable part of the job, one he will endure so long as the mortality risk remains at 20% or below. You can easily see how the two men funhouse mirror each other, and how their down-to-the-wire season forces them into exaggerated versions of themselves. The best perk about Americans not knowing a “spot of Earl Grey” about Formula 1 is that most audiences won’t know who won in real life! For once, ignorance delivers entertainment and not just regrettable elected officials!

You’ll notice there’s no mention of Olivia Wilde’s character, Suzy, in that summary. Nor is there mention of Alexandra Maria Lara, who plays Lauda’s wife Marlene. There’s a reason for that. Suzy is such an afterthought that when she is shown watching the final race of the season, you’ve almost forgotten she existed. And Marlene, who seemingly altered the foundational personality of Lauda in real life and thus indirectly changed the outcome of the racing season, has something like three spoken lines after her clever and playful introduction. The only time any two women are on screen together is when Hunt has a menage a trois, which I’m pretty sure isn’t part of the Bechtel Test.

That aside, the film is briskly paced, with racing scenes that somehow don’t feel repetitive despite the fact that racing is basically doing the same thing over and over again as fast as you can. Hemsworth and Brühl are both in tip-top form, with the latter standing toe-to-toe with Thor’s performance, despite wearing the world’s silliest prosthetic overbite. It’s not quite a sports movie (and not just because some don’t see racing as a sport) and not quite a character sketch, yet somehow Rush is a photo-finish away from being very good.