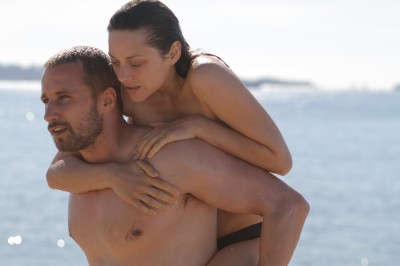 Given that France is America’s go-to national punching bag for milquetoast xenophobic jokes, it is a testimony to her towering talent that Marion Cotillard is an Oscar-winning box office draw. Even reducing her physical presence by a third in her latest, Rust and Bone, does nothing to stunt her on-screen magnetism, or what the French call “Le, daaaamn!”

Writer/director Jacques Audiard and screenwriter Thomas Bidegain have taken two short stories by Craig Davidson and woven them together in one morose romance between two broken souls. Honestly, the elements that are unique to this tale are the sorts of gimmicky schtick that would normally lend itself to an Ashton Kutcher rom-com than an Oscar-bait drama. She’s a killer whale trainer whose routine is set to Katy Perry’s “Firework,” he’s a down-on-his luck single dad with dreams of becoming a boxing icon. If you just take out the disfiguring injury and soul-crushing emotional nihilism.

Stéphanie (Cotillard), the aforementioned aquatic theme park worker, meets Alain (Matthias Schoenaerts) under ignoble circumstances. He’s a bouncer at a bar in which she got roughed up; so, ever the gentleman, he takes her home and tells her she’s dressed like a whore (which is apparently an insult, even in France). Proving that pop music results in terrible disfigurement, Stéphanie loses her legs beneath the knees in a killer whale accident during a performance of “Firework.” And for some reason, Stéphanie reaches out to Alain.

It could be that one encounter with the rough-and-tumble, emotionally stunted Alain is enough to know she’d have a kinship with him. If she is now handicapped by injury, he has been held back by his clearly unwanted son and inability to make his passion for boxing translate into a real life. When Stéphanie comes back into his life, it is just as he has discovered a lucrative street-boxing ring, which is always the best way to put food on a family’s table. The intricate dance between the two messed-up has some pretty genuine ups and downs…and one or two hot-and-heavy up-and-down-and-up-and-downs.

What makes this film work is what always makes subdued quasi cinema verite films of this nature work: the acting is pretty great. Cotillard shows once again that she can do with a sideways grimace and batting of her smoky eyes what most American actresses do with hair pulling and yelping. And Schoenaerts is no slouch either, quickly flipping between “bad boy with a heart of gold” and downright dangerous. It is easy to see these two being drawn to one another, which isn’t to say this is a feel-good experience.

And really, that’s Rust and Bone’s major shortcoming: it’s really just a rom-com without the “com.” It’s a downer littered with the trappings of talented actors and nuanced characters that we’ve seen countless times. Cotillard could make a PSA on reducing muffler noise appealing, but she can’t make it meaningful or valuable. Audiard and his cinematographer definitely cue up some gorgeous shots, specifically the first street boxing sequence. But while rust sticks to cars and muscle sticks to bone, Rust and Bone won’t stick to your memory.