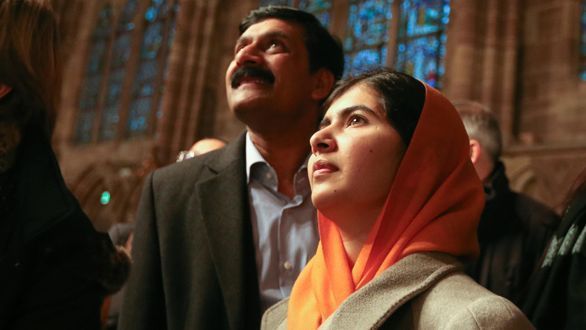 At the moment, there are just over 60 million school-aged girls around the world being denied their right to an education because they are either forced to work, were married early in life, must take care of their siblings at home, or are second-class citizens who face violence if they even consider attending a school. Because women having equal access to education is typically one of the major factors that transforms an unstable region into a stable region, the work of girls’ education activists like Malala Yousafzai and advocacy films like He Named Me Malala are terribly crucial to the development of our world.

Directed by Davis Guggenheim (An Inconvenient Truth, Waiting for Superman), the documentary He Named Me Malala profiles the life and work of the teenage Pakistani activist who is internationally known as the youngest ever winner of the Nobel Peace Prize. The title refers to a hero in regional folklore (essentially the Afghani Joan of Arc) who Malala was named after by her progressive father. The big idea behind Guggenheim’s film is to advocate for Malala’s mission while showing what a normal teenager she is, although she’s just so legendary-feeling that it’s impossible to equate her with everyday teens.

Quite a bit of attention is paid to Malala’s close relationship with her similarly outspoken father, as well as her trials and tribulations of trying to be a normal teenage girl in the western world, including endearing fights with her younger siblings that we can all relate to. But none of that ever goes deep enough to compare with the more riveting scenes of Malala traveling the globe to spread her message. At 18, I’m sure Malala can command a room as well as any world leader. However, the most memorable moments in the film are toward the end, when Malala finally discusses her attack.

On October 9th, 2012, after quickly emerging as a prominent voice in the girls’ education movement, Malala was targeted for execution. Two Taliban gunmen attacked Malala’s school bus and shot her, point blank, in the head—actually blowing a large piece of her skull completely off. Miraculously, Malala not only survived the attack but also regained full cognitive ability (although the left side of her face is still mostly paralyzed from nerve damage). To see such a powerful presence so unnerved by an act of extreme violence is chilling, but that effect is what makes He Named Me Malala stick it’s landing.

Obviously, He Named Me Malala has some major problems. Yes, it’s storytelling is fairly sloppy and relies on cheap animation. Yes, it sometimes feels run-of-the-mill. Yes, even at 88-minutes and with a solid conclusion, it’s still 15-minutes too long. But I can’t deny that it resonates in a big way because of its incredible subject and it’s strong sense of advocacy. Trying to capture Malala’s humanity through her everyday life was an unexpected misstep, but it’s hard not to get behind a mission led by someone so transcendent.