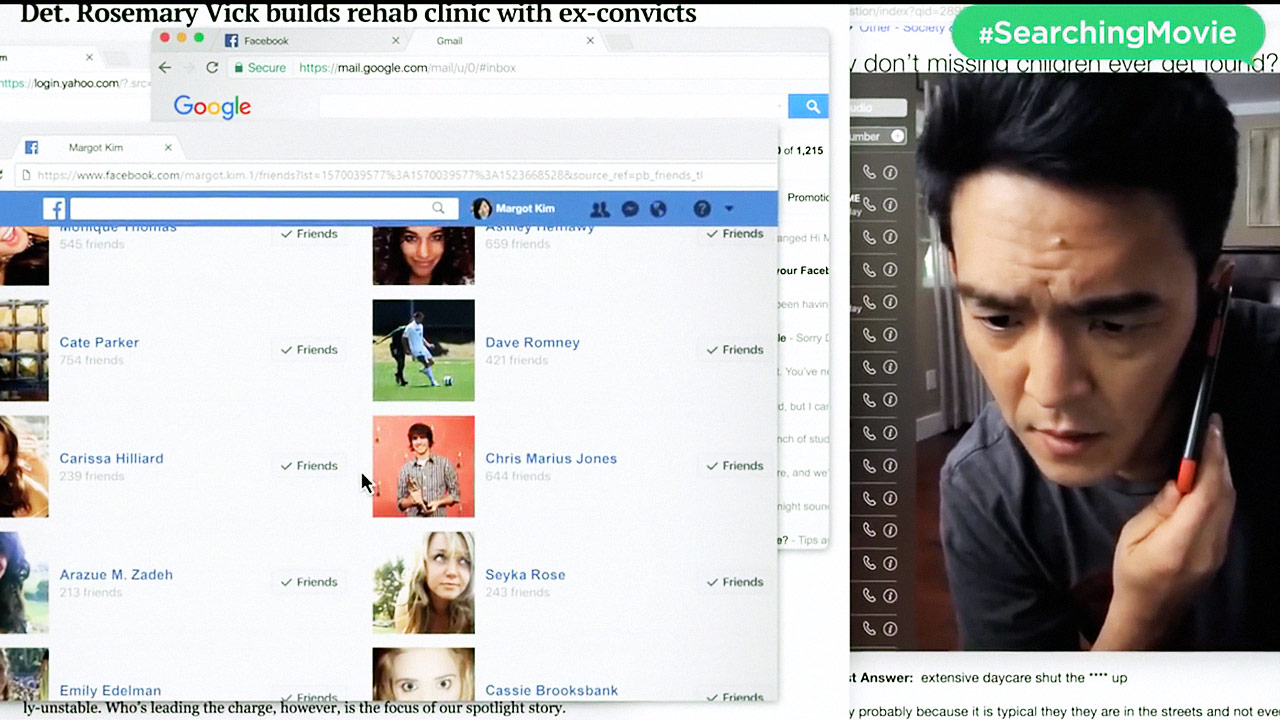 Every few years, somebody gets a weird bug up their ass to make a movie that doesn’t look like a movie, from Hardcore Henry, a first-person-perspective vomit encourager, to the new flick Searching, writer/director Aneesh Chaganty’s immersive “Watch a dad misspell tumblr on his daughter’s laptop” experience. Innovation is vital, especially given the stagnant sameness water in which cinema belligerently swims. But a format that’s relentlessly unpleasant to watch and that handcuffs the performance of all actors seems, I don’t know, bad?

Maybe it would have helped for Searching to not also sport a schlocky murder mystery so implausible that it makes USA’s The Sinner look like a meticulous documentary. Actually, everyone should be watching The Sinner this season, if only for Carrie Coon playing a rock-worshipping cult leader. I know this is a review of Searching, but I believe the old adage is “If you can’t say something nice, talk about how rad Carrie Coon is.”

Searching is a movie that takes place entirely on screens (mostly computers and smartphones). After an opening that asks “What if the first scene in Up was a Facebook commercial?”, the film Facetimes its way into a missing persons movie. We watch as David Kim (John Cho) clicks through online contacts and social media to find his missing daughter, Margot (Michelle La), with the help of Detective Vick (Debra Messing). Exciting developments happen almost entirely off-screen, as we are forced to watch a freaked out dad who uses his computer as a phone more than anyone ever has in history.

The twists in Searching are, let’s go with “ambitious.” None of them work, but kudos to Chaganty and cowriter Sev Ohanian for being unafraid to go with the kookiest possible multiple choice answer to every question. Cho does everything he can to ground the film in some form of grieving plausibility, but it turns out that acting on, at most, half of a laptop screen doesn’t do performers any favors. It also doesn’t help that Messing turns in a performance so awkward and awful that Will & Grace is re-cancelled as retribution.

The question is: Would Searching have worked as a regular ole movie and not as a gimmick-fest tickled with preposterous plot developments. No. But it may have stumbled into the kind of pulpy Dateline NBC-ish pseudo-true-crime garbage that can be satisfying in the proper doses. Instead, the twists bump against the constraints of the premise, leading a few tense moments to actually become profoundly embarrassing. I don’t think I’ve laughed as hard at an intentional beat of comedy in a theater all year as I did at one particular scene intended to be climactic and gripping here.

Experimentation is to be applauded, but this whole schtick was attempted four years ago with Nacho Vigalondo’s Open Windows. So the nicest thing I can say about Searching is that Carrie Coon is really, really great in everything she does, like her turn in Fargo last year, and that you should watch her in The Sinner.