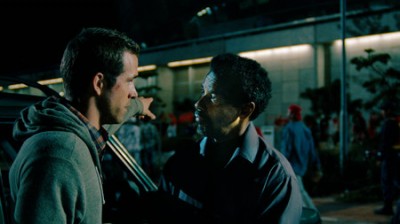 Ryan Reynolds plays Matt Weston, a rookie C.I.A. agent assigned the espionage equivalent of latrine duty. He’s wasting away in South Africa guarding a never-used haven for spies. Just as he’s bemoaning a lack of action, in walks Tobin Frost (Washington), a former spy who is now all kinds of naughty. Frost is in possession of bad guy catnip in the form of a file with dirt on agents in organizations around the world. As is to be expected, things get ugly when they come a-knockin’ on Weston’s door.

Before long, Weston and Frost are on the move together, with the elder constantly playing mind games with the noob. Meanwhile, back in Langley, Catherine Linklater (Vera Farmiga) and David Barlow (Brandan Gleeson) fail miserably at trying to provide guidance, a fact compounded by an apparent rat within the covert agency. Before you can say “it’s just a flesh wound,” here come the obligatory car chases, Bourne Identity-esque fight sequences and a secret reveal that’s not particularly secret and in no way revealing.

Writer David Guggenheim proves once more that characters can drown in the shallow end, as Reynolds is the stale action staple that is “the boy scout” and Frost is the “bad guy who isn’t such a bad guy.” More troubling is what happens to the ladies, with the talented Farmiga given slightly more to do than a hanger in the costume department and Weston’s girlfriend (Nora Arnezeder) allowed only to sniffle and pose.

Although Espinosa is clearly doing his Tony Scott impression, with the grainy visuals and disorienting editing, the action is astoundingly kinetic. The fisticuffs and automobile encounters are the meat in this cinematic burger, and even if the characterization condiments are weak sauce, the main ingredient is juicy. To pay the largely uninspired script a baby compliment, the lack of terrorist bad guys is refreshing, even if the end result is a message that seems to suggest every member of the C.I.A. is a bastard-coated bastard to some degree.

Many critics have been beating up on Safe House for its simplistic brawn, which is like criticizing the beach for being sandy. This is brainless diversionary fare that is judged on a sliding scale of “did I have a good time and feel appropriately thrilled and chilled.” Never boring and often fun, this dumb ole dog may not have new tricks, but it’s still fun to play with and worth a scratch behind its ears.