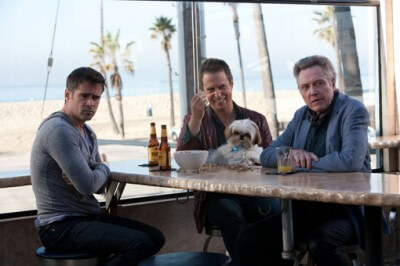 With massive mainstream media marketing rollouts and the box office boons reaped by free social media, movies so rarely surprise us these days. Shock cameos are spoiled in the space of a tweet, while most trailers render buying the proverbial “movie cow” moot when you got the “third-act milk” for free in the preview.

Guess what? You’re so not ready for Seven Psychopaths.

And don’t worry about it being spoiled for you. It’s virtually unspoilable in its originality and scope. Telling you that one of the best scenes involves Tom Waits as the bunny-stroking half of an interracial serial killer-killing duo doesn’t dampen the experience. Even revealing that the whole flick is more Charlie Kaufman than Quentin Tarantino won’t ruin the surprise that’s in store. Now, by no means is it perfect, but just like in gymnastics, when you start with this high a degree of difficulty, you don’t have to stick a perfect landing to light up the scoreboard.

Having to write a synopsis for this feels mean. Okay, so Colin Farrell is Marty, an Irish screenwriter with a drinking problem still in the denial stage. He’s working on a screenplay called, wait for it, Seven Psychopaths. His friend, Billy (Sam Rockwell), wants to help him but is also busy dognapping pooches with Hans (Christopher Walken), who is also tending to his cancer-stricken wife (Linda Bright Clay). When Billy steals the canine of a bad, bad man (Woody Harrelson), Hans, Marty and Billy wind up on the run in the middle of the desert, camping and doing peyote.

That’s the best that can pass for a synopsis of writer/director Martin McDonagh’s latest one-third violent, one-third hilarious and one-third philosophical endeavor. What’s sad is that Alan Arkin’s casual turn in Argo is likely to obliterate the chance for Walken to win best supporting Oscar in what is so easily the finest performance of the second half of his career. Even Farrell is downright great; somewhere there’s a mathematical algorithm that proves when he doesn’t have to mask his accent, he’s pretty brilliant. And if you don’t like an unchained Rockwell performance, you may have damaged the part of your brain that feels joy.

That said, McDonagh isn’t quite as seamless as Kaufman in the “meta moments.” Having his characters all but announce “the second half of this movie is going to be totally different than the first” isn’t really clever so much as a bit lazy. And there may be one or two extra plot diversions, like Harrelson and Farrell’s girlfriends. But that’s somewhat forgiven because their inclusion allows McDonagh to make an on-screen admission about the role of women in film through Walken that is absolutely vital.

Look, it’s hard to go wrong when you have Tom Waits stroking a rabbit while talking about cutting people’s heads off. Combine that with a not-subtle-at-all indictment of this culture’s obsession with revenge fiction and brutality mixed with a rather sizable amount of laughs and you have one of the more brazenly original films of the year. This is to say, if you see only one movie where Harry Dean Stanton plays a throat-slitting Quaker this year…