Home » Film » Who Knows What She Wanted 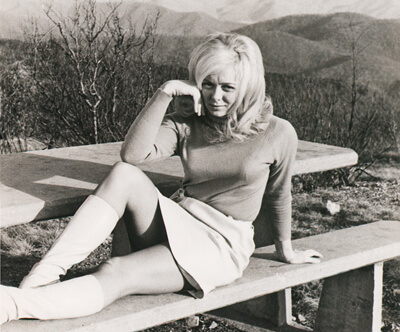 If Joyce McKinney’s life were a work of fiction, her author would have been mocked. Thankfully, master documentarian Errol Morris didn’t invent her, he simply found her.

Morris (Fast, Cheap & Out of Control, Fog of War) again shows his ability to mine absurd and obsessive personalities for darkly humorous and dramatic stories. Tabloid is disorienting and baffling, packed with un-documentary-like titillation. Although its subject matter may be of somewhat trifling consequence, it’s hard to remember the last time a documentary was this wildly entertaining.

The thrust of the film is spent investigating the salacious events of McKinney’s trip to London in the late 1970s. One of two things happened: either McKinney had a Romeo-and-Juliet reunion with her lost love, Kirk Anderson, who had been brainwashed into strict Mormonism, or she kidnapped a devoutly religious man during a missionary trip, tied him to a bed and turned their remote English cabin into the sex party capitol of the U.K. The British tabloids decided that true love didn’t sell quite as many papers as “The Mormon Sex in Chains Case,” so they didn’t wait for the evidence to mount before splashing tawdry headlines.

And it probably wouldn’t have mattered if they did. The more information provided, the more illogical and hazy this story becomes. Is it more reasonable to believe that the then-22-year-old McKinney was an obsessive rapist or that Anderson invented his abduction out of guilt at having violated his Mormon faith by playing horizontal Yahtzee with a beauty queen who loved him. Right at the point in the documentary when McKinney seems to be a sweet but gently insane woman who was betrayed by a person she thought was her one true love, Morris reveals what the British rags discovered: McKinney was a call girl with a penchant for legal trouble and owner of a wild imagination.

Tabloid isn’t obsessed with answers, as Morris’ body of work is more about a thematic exploration of how every method of truth-seeking is fundamentally flawed. At varying points in his career, Morris has popped the reliability of newspapers, individual people, photographs and newspapers like balloons stored on a bed of nails.

What’s remarkable is that Tabloid also keeps an air of tragedy despite a whimsical and comic spirit. This is best exemplified in the depiction of McKinney’s final brush with fame, when she was the first person to have her dead dog cloned. Somehow Morris balances the lunacy of a story that began with S&M and Mormonism and ends with puppy reincarnation with a sense of pity for McKinney, who by all accounts at least cared for Anderson enough to never find love again.

Morris is a master of the little touches, like using a device that projects his image in front of the camera when interviewing his subjects so that they must look both in his eyes and directly at the lens. But he always remembers the biggest rule of documentary filmmaking: The subject need not be of great importance, but it must be fascinating. Tabloid is nothing if not relentlessly interesting.

Editor’s Note: Joyce McKinney contacted this paper as we prepared to go to press to dispute Morris’ depiction of her, calling the film a “celluloid catastrophe.” While not expected in Omaha this weekend, she has been known to attend screeners to protest the movie’s telling of her story.