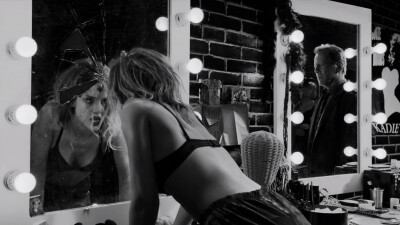 Celebrated narcissist and Freddy Krueger look-a-like Frank Miller gives the women he writes a plethora of career choices. They can be prostitutes, strippers, bondage-wearing murderers or corpses. Some get to be all of those! Sin City: A Dame to Kill For is part entertaining cartoon noir, part violently fetishized relationship revenge fantasy. The first part is recommendable; the second part is vile.

Writers/directors Robert Rodriguez and Miller finally deliver the sequel very few people have been clamoring for since their original Sin City came out nearly a decade ago. At the time, the film was visually arresting and a welcome reprieve from the stale and repetitive action template being used. Rodriguez and Miller confused that with having made some kind of legendarily important work and have been trying to get “the people” clamoring for more. They never clamored, but here it comes anyway. Don’t worry, the directors cameo to take a bow.

The interlinked vignettes take place before and after the last film, without any explanation which is which. It’s more evidence of the hubris Rodriguez and Miller have: they believe everyone has events of the last film memorized from so many rewatches. Set once again in a film noir urban hell, the only constant between the stories is tough-guy violence and misogyny.

We see Marv (Mickey Rourke) joining up with Dwight (Josh Brolin) to kill a bunch of people before Marv joins up with Nancy (Jessica Alba) to kill a bunch of other people. We meet Johnny (Joseph Gordon-Levitt), a lucky and suave suit-and-tie who wants to destroy Senator Roark (Powers Boothe). All segments are basically murder-as-closure revenge adventures. Oh, and Bruce Willis shows back up again, even though his character is dead.

Surprisingly, the visual style holds up. It is no less compelling to see the stylized hyperviolence, complete with bloody plumes of arterial spray colored as white as pure as snow. Better yet, this installment seems to realize that Sin City works best as an altered black comedy, with 1940s pulp-era dialogue so strained and silly it has to be a joke. All of it is rasped in every actor’s throatiest whisper. Sin City: The town without a cough drop.

That’s all fine. Even having the perpetually nude Eva Green as a femme fatale may have been dismissed as just thematic posturing, had the film not settled into an obvious pattern. Each woman is deceitful or dangerous, hung up on a man (or men) they declare is “the only one” they’ll ever love. It’s like Miller wants so badly to have someone tell him that, he’ll keep writing it into the mouths of those he controls to ease the pain.

Sin City: A Dame to Kill For is perfectly fine, live-action cartoon escapism, provided you remember Frank Miller doesn’t consider women to be people. When that fact is taken into consideration, what was a decent distraction becomes a tale that’s dark for the wrong reasons.