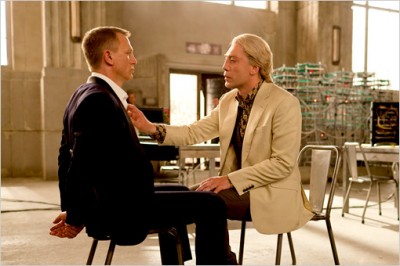 The moment when the seemingly-perpetually-creepily-coiffed Javier Bardem caresses Daniel Craig’s thigh parts and whispers whatever the supervillain equivalent of a sweet nothing is, using whatever non-geographically distinct accent he uses this time, is the precise moment Skyfall becomes the best Bond film in decades. Why? Because of Bond’s response.

Instead of recoiling, the supersexy superspy responds to a taunt about being unprepared for such same sex flirtation by coyly and smugly saying “What makes you think this is my first time?” Now, despite what the inevitable torrent of think-pieces assailing the Internet as we speak will tell you, this wasn’t a true declaration of Bond the Bisexual. But it is a clever shunning of traditional gender roles and staid sexuality that speaks to the thematic central question of the epic film: Does James Bond have a place in the modern world?

You bet your Aston Martin he does.

Director Sam Mendes and writers Neal Purvis, Robert Wade and John Logan have succeeded in finally, fully rebooting Bond for the 21st century. You may have thought Craig’s arrival in 2006’s Casino Royale did that, but you’d be wrong. A fine film to be sure, but it was one that ditched almost everything about 007 in an effort to ape the gritty action needs of modern audiences. Gone were the gadgets, the insane spectacle action pieces, the playful nature of the world’s only name-brand spy. What Mendes and company have done is establish the new tone: fun but not goofy, grounded but not terse and committed above all else to cleverness.

Well, save for the plot, which is pretty lame. The film spends the first hour with Bond hunting down a computer file with the names of secret agents in it, which marks the umpteenth time a spy has had such a task. The new government overseer, Gareth Mallory (Ralph Fiennes) is peeved at the long-time head of MI6, M (Judi Dench), for botching the operation to retrieve said files, which briefly appears to have resulted in a new agent, Eve (Naomie Harris), kinda sorta killing 007.

Blissfully, halfway through it’s “damn the MacGuffin,” and we’re treated to a pure revenge film, with Bardem’s Silva wanting to kill M for what she did to him in the past. Silva keeps telling Bond that they are brothers, funhouse-mirror versions of each other, and he keeps pushing 007 to realize the world has passed him by. The more bizarre things get, like Silva revealing his physical deformity or the film devolving into a “farmhouse survival” movie, the more Skyfall soars.

Bond’s interaction with Q (Ben Whishaw), the young tech whiz who helps the spy with his equipment, is further proof that Mendes has “resurrected” the 50-year-old character. The temptation to make Q comic relief is almost palpable, but Mendes resists and turns the dynamic between the two into a telling case for Bond to give in to modernity. Only when he does is the agent able to succeed.

Filled with the best practical stunts and gleeful explosions to be gorgeously captured on film in ages, Skyfall is relentless and joyous; it is one misstep—a terrible overreliance on unnecessarily complicating the first act—from being complete perfection. The best Bond debate will rage on, but there is little arguing this is the best work in the franchise in no less than 30 years.