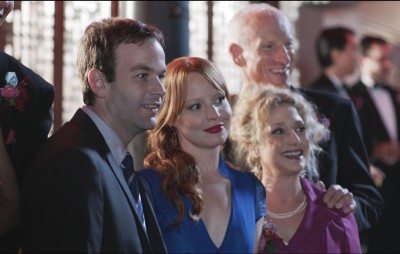 A note for the admittedly small subset of folks who swoon at the storytelling magic of “This American Life” and tingle at the mere mention of Ira Glass’s name: Sleepwalk with Me is charming public radio entertainment channeled into cinemas. Watch out Hollywood blockbusters, if there’s one thing mainstream movie audiences have demanded, it’s more material adapted from NPR.

Writer/director/star Mike Birbiglia is a stand-up comedian gifted with telling the kind of low-key, softly spoken tales that populate NPR. What’s astonishing is that it actually works as a feature film equally well. Birbiglia fictionalizes his own life story, changing his name to Matt Pandamiglio, an aspiring comic at the point in his young career where he moves from “guy working at a bar in comedy clubs” to “guy bombing while he tells jokes at crappy venues.” He’s also sleepwalking, likely due to stress about his sputtering relationship with Abby (Lauren Ambrose), a beautiful and delightful creature who he has dated for eight years without any promise of marriage on the horizon.

His parents, Frank (James Rebhorn) and Linda (Carol Kane), have different approaches and a dysfunctional 40-year marriage, but both want their son to make something of himself in terms of his career and personal life. With the help of a terrible agent, Matt is able to hit the road with new, self-deprecating material while his union with Abby spews its death knell and his sleepwalking increases in its potential to harm him.

There haven’t been many great movies about stand-up comedy, likely because of the “hot dog” effect. Nobody wants to watch how a hot dog is made because it destroys the possibility of ever willingly eating a hot dog again. Although not as extreme, watching troubled folks battle through real emotions to arrive at things we laugh at kind of ruins the part where we laugh at them. What Sleepwalk With Me gets so very right is that it keeps us out of the sausage factory but still allows compelling insight.

Birbiglia lets himself come off as a jerk at times, which is refreshing. Seeing as how Ambrose’s performance makes it impossible for any heterosexual male to understand why he’d struggle committing to her, Birbiglia basically cops to the fact that it’s personal, indefinable screwing up that does their relationship in. As sad as it is to watch a romance-centered movie with a couple whose destiny doesn’t seem uplifting, the film rubs a salve made of jokes on the wound.

If there is a problem, it’s the major conceit of the film. The sleepwalking doesn’t seem to be the compelling central staple everyone thinks it is. It comes and goes, is simply a distracting and obvious metaphor for his life and concludes in unsatisfying fashion. This isn’t to say the movie concludes that way, as the sum total of Birbiglia’s honesty, Ambrose’s charm, clever writing and copious comedian cameos is an entertaining indie that feels like a near documentary.

If you think NPR is something Charlton Heston used to run, Sleepwalk With Me may not offer the pace and plot to satisfy you. But if you like light, quirky tales of human interaction, it’s hard to dream up much better.