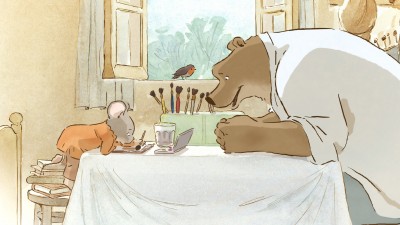 Gather ‘round kids and hear a story from the days of yore, a time when artists drew cartoons with their actual human hands and not every children’s movie had covert sex jokes for ma and pa to chuckle at. It was a time before everything was glossy and smooth, before Pharrell and his hat dropped feel-good funky dance beats over computer animation in an attempt to market a soundtrack to a wider demo.

Ernest & Celestine could have been comfortably released in the 1940s. This adaptation of a popular series of Belgian children’s books is one of the least callous, most organically charming kids’ movies from any continent. Last year’s Frozen was an instant classic that only grows better with each viewing, but it was still a shiny corporate product designed to sell toys and music downloads. Ernest & Celestine is pure childhood sweetness, with a visual motif that makes it feel like someone just finished sketching it in front of you.

Screenwriter Daniel Pennac’s adaptation of Gabrielle Vincent’s books keeps the plot not only child-friendly but toddler-accessible. Celestine (Mackenzie Foy) is an orphan mouse who is forced to retrieve discarded bear teeth that are then turned into mouse dentures. The mice fear the bears, and the bears see the tiny creatures as annoying vermin. But Celestine believes the two groups could be friends if they simply refused to see only the worst in each other.

She must put her money where her mouth is, or technically where a bear’s mouth is, when the hungry Ernest (Forest Whitaker) nearly eats her. She convinces him not to and helps him find food, albeit illegally. The two soon find themselves on the run from their respective communities for various alleged crimes when really the groups just don’t like the two species intermingling. Yep, it’s basically just a very approachable lesson in tolerance and not stereotyping others. Directors Stéphane Aubier, Vincent Patar and Benjamin Renner don’t skimp on the cutesy, which is to be expected when your story is about a chubby affable bear befriending a sweet and innocent mouse.

At just under 80 minutes, Ernest & Celestine doesn’t outkick its coverage, as it is content to tell a simple message in succinct and sweet fashion. And that fashion is particularly pretty if you’re a fan of hand-drawn animation. The scrawled, scribbly outlines of the characters produce a seemingly unfinished art effect that is particularly effective in an era when all Disney and Dreamworks movies seem to have the same CGI-created visual DNA. Also refreshing is the film’s laser-focus on its intended audience. This is a kids’ movie for kids, with kid jokes and kid themes. While that does leave grown-ups somewhat on the outside looking in, it also prevents the film from feeling like a calculated capitalist cash grab.

Ernest & Celestine is frakkin’ adorable if simple, heart-warming if fairly unoriginal. But above all else, it’s an artistic endeavor handmade for children who will undoubtedly love it.