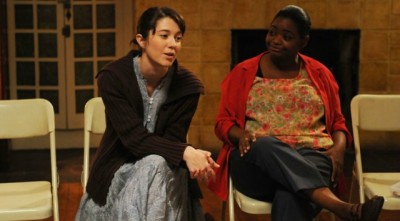 The ubiquitous hyperbolic after-school-special-type of dramatization of the perils of alcoholism has lost its teeth; it no longer delivers a social bite so much as it gets drool everywhere. Thus, in many ways, what Smashed wanted to do is something necessary, as we need a reboot of our cultural cautionary tale that ditches the wailing melodrama in favor of the muted reality of modern addiction.

Mary Elizabeth Winstead plays Kate Hannah, a dowdy grade-school teacher who dresses like she raided Laura Ingalls Wilder’s closet and drinks herself daffy every night. This actually isn’t a depressing kind of debauchery but a lifestyle she shares with her writer husband, Charlie (Aaron Paul). They actually seem to be having a pretty great time, right up until Kate upchucks in the general proximity of the trashcan in front of her students.

In that barfy moment, a lie is born, as Kate tells the kids she’s pregnant, much to the glee of Principal Barnes (Megan Mullally). Then she goes out that night and smokes crack. Okay, so there’s a little over-the-top melodrama. The crack moment finally breaks Kate, who acquiesces to an invitation from her colleague, Dave (Nick Offerman), to join his AA group, where she meets her future sponsor, Jenny (Octavia Spencer). But as it turns out, it’s really hard for one half of a pair of alcoholics to sober up without the cooperation of the other. It’d be like if Cheech tried to do Shakespeare while Chong kept making “what’s in the brownie” jokes.

Although Offerman gives it his goateed best and Spencer reminds us that her role in The Help was shameless award-baiting that worked, this is all about Winstead. Her ability to deftly shift from near rom-com quirkiness to raw, brutal honesty keeps Smashed from finding a future home on Lifetime. Writer/director James Ponsoldt and writer Susan Burke were wise to show the rarely examined destructive spiral that often befalls young couples who met and fell in love beneath shared bourbon. But beyond that they didn’t really give Winstead much more to work with.

The pacing is stunted, subplots like the one in which Dave says the word moist in its worst possible context feel wonky and the payoff, while true to life, feels pretty unsatisfying. Was it not for Winstead proving she’s capable of the type of overt emotional expression and nuanced subtlety that most actresses her age can only pout about, Smashed would have been marginally useful and wholly forgettable.

If it seems weird that Paul’s role hasn’t come up more in this review, it seemed weirder that he didn’t come up more in the movie. The actor appeared game but disappeared for long stretches, as the motivations for his reticence to join a wife he loves were unsatisfying spelled out in shorthand.  The result is a pretty solid character sketch of Kate that could have been a powerful reimagining of a subject that’s been go-to melodrama for decades. Still, Winstead is quite worth it, the concept isn’t totally botched and Smashed returns all investments in its itty-bitty run time.