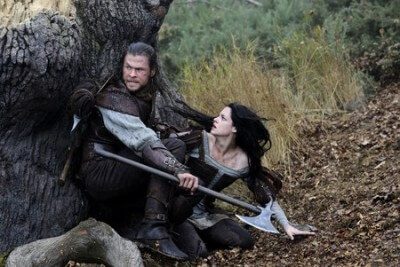 A once-beautiful woman who has an uncomfortable relationship with her brother is disintegrating into a skeletal hag. But enough about Angelina Jolie. Snow White and the Huntsman features Charlize Theron rising above her Helen-of-Troy beauty to once more deliver a wicked performance that proves there’s more going on under her hood than atop her perfect chassis.

In this Grimm and gritty retelling, Snow White (Kristen Stewart) is given more to do than flirt with birds, dwarves and princes; the evil queen is given something that resembles passable motivation and Chris Hemsworth is given the chance to act with his shirt on for a whole movie. While the result is far from transcendent intellectual splendor, the film is amply entertaining, whimsically designed and compelling enough to forgive its occasional fudging.

In a wonderfully lyrical and nicely paced opening, a young Snow White sees her mother die and her father, the king, remarry a hottie who turns out to be a naughty nottie. Because she has a penchant for turning into a murder of crows and “Crowella” sounded too on-the-nose, the evil queen is named Ravenna (Theron). And Ravenna ain’t havin’ any of the king’s scepter.

On their wedding night she offs him, locks the soon-to-be-fairest-of-them-all in a tower and begins putting the O in oppression. With her bowl-cut-wearing and far-too-physically-intimate brother, Finn (Sam Spruell), the evil queen destroys the land. Until Snow White, now properly of age for a girl to go wild, escapes to the dark forest. The queen dispatches the Huntsman (Hemsworth) to retrieve her, but instead he joins her and a bevvy of Ewoks, er, dwarves (Ian McShane, Bob Hoskins, Ray Winstone, Nick Frost and Toby jones, among others) in overthrowing the empire.

Director Rupert Sanders appropriately captures the splendid art design and somewhat reluctantly films the humans. His problem is likely that writers Evan Daugherty, John Lee Hancock and Hossein Amini didn’t so much remember to infuse character into the characters while they were busy worrying about how to get Stewart into a suit of armor and Theron into a milk bath. The most egregious problem is how stoic and serious it all is. We ain’t talkin’ Tolkein here. If Sanders and company had infused colorful humor into this bleached white experience, it would have been eminently watchable.

Instead it’s the expected fairy tale remix. Once more the youthful and beautiful woman replaces the old and ugly, after the pretty young thang is sufficiently rescued by dudes and resuscitated with a man’s kiss. Raising a sword and doing a Braveheart impression does not meet bell hooks’ definition of feminism. Although both Theron and Stewart are largely blameless here. Theron chows down on the juicy drivel. And while Stewart has been absolutely unfairly lambasted, in some cases by critics who defended Taylor Kitsch in John Carter, she does a perfectly fine job being the pretty, feisty princess she was written to be.

Snow White and the Huntsman isn’t a classic or a misfire. It’s gorgeously shot and designed, successfully paced and a slightly lighter tone away from being pretty great. In the absence of “happily ever after,” that’s not too shabby.