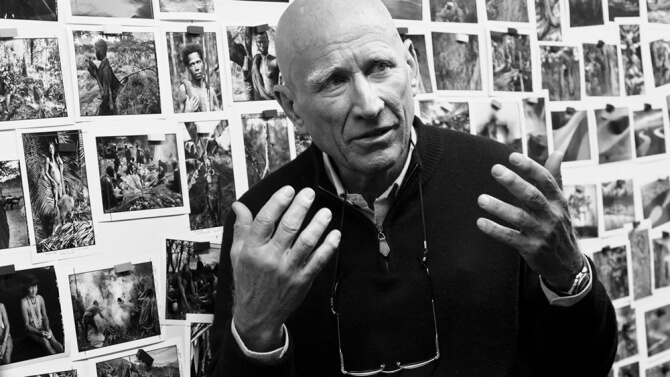 You know those feel-good documentaries that make your heart swell as you discover some unknown artist, overlooked genius or divine but unrecognized human accomplishment? The Salt of the Earth is not one of those. For about 95 of its 110 minutes, directors Wim Wenders and Juliano Ribeiro Salgado assail your soul with photographs of the absolute worst shit any human has ever seen. That’s not an overstatement or hyperbole; we’re talking exposure to the crème de la crème of evil horror. In other words, it’s perfect for blind dates, provided you hate the person who set you up on it.

Technically, The Salt of the Earth is a biography of photographer Sebastião Salgado. For four decades, the Brazilian has traveled the globe, working as a “social documentary photographer.” Essentially, he and his wife, Lélia Wanick—who is oddly absent from much of the documentary—come up with a major theme, and then Salgado explores it visually for years. For example, “Workers” explored impoverished laborers, “Sahel: The End of the Road” examined the suffering in Africa during a major drought in 1984 and “Genesis” investigated tribal life and nature as close as could be to original harmony (pre-industry).

The last one, “Genesis,” is beautiful and moving. It ties in to Salgado and Wanick’s Institutio Terra, which is a restoration of part of a rainforest that began in the 1990s. Yeah, they rebuilt a rainforest, in case you feel like recycling is a bit too much effort on your part to save the planet. While that is uplifting, everything else is very much not. Salgado’s work has been criticized by some as exploitative. And it’s easy to see where that criticism stems from. The film is often a traveling exhibition, featuring scores of images of dead babies, stacks of bodies, devastated communities and on and on. Is Salgado exposing a truth we flinch from, daring us to stare in the eyes of this world’s true horror in an effort to make us confront it? Or is he an artist who wins awards and a non-insignificant amount of fame and fortune profiting from images of this world’s most broken creatures?

In another documentary, we may have been provided an answer. This one, however, was directed by an admitted superfan (Wenders) and the Salgado’s son. Impartiality is never easy to find between documentarian and subject, but it’s completely absent here. This isn’t to say The Salt of the Earth isn’t excellent and important. In fact, by letting Salgado’s work speak for itself and placing it in context of his life, the film provides enough evidence to convince viewers that the photographer certainly has never intended exploitation and is a true believer in social and global change.

The Salt of the Earth is harrowing, haunting and holy. It’s a challenge at times to watch, but ultimately it is proof that to “see” is to “know.” Even if, sometimes, we wish we didn’t.