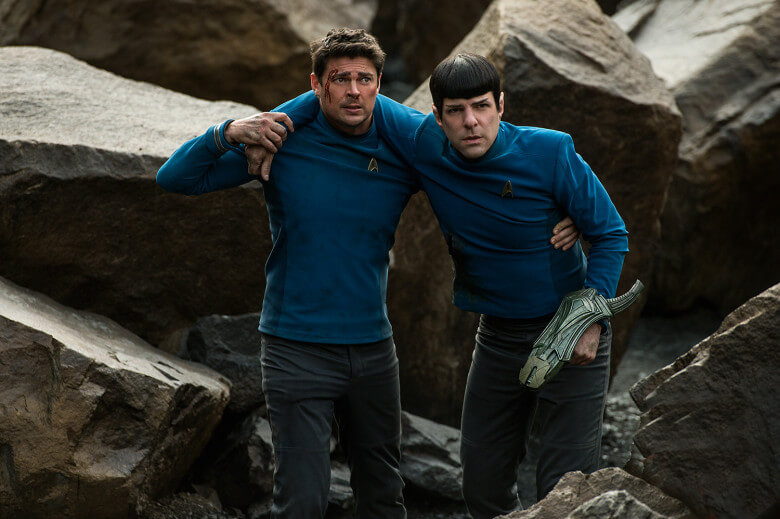 Both the original “Star Trek” and “Star Trek: The Next Generation” got to warm up on the small screen before being called up to the big (screen) league. This not only gave their cinematic endeavors a heightened sense of importance, it fleshed out the depth of the crews’ overall mission and provided the real-life casts more frequent opportunities to congeal. In its third go-round, the rebooted, sexier (fine, Shatner and Stewart aside) Star Trek franchise has finally figured out the importance of making it feel like these characters (and actors) have been stuck in a bucket adrift in space for ages. The result is the most truly “Star Trek”-esque installment of the new series, albeit one that retains enough CGI “kerpow and kaboom” to Rodden your Berries.

Three years into a five-year mission, Captain Kirk (Chris Pine) has got a case of the “space Mondays.” He’s fatigued by peace-making during space missions, exploring space frontier, and (most likely) shagging countless odd-colored space ladies. Spock (Zachary Quinto) and Uhura (Zoe Saldana) are on the outs because the pointy-eared logician feels a responsibility to breed with another Vulcan, given the species near-extinction. Bones (Karl Urban), Scotty (Simon Pegg), Sulu (John Cho) and Chekov (Anton Yelchin) presumably have their own stuff going on but realize everybody only cares about Spock and Kirk, so they respectfully keep that stuff to themselves.

A random vessel (always mentally pronounced with a “W” not a “V” in honor of Chekov) shows up to a spaceport at which the Enterprise is resting. The captain of said ship gets Starfleet to send Kirk and said posse through an impossible-to-navigate nebula in order to rescue her crew, who are stranded on a planet inside said nebula. The evil Krall (Irdis Elba) messes up the Enterprise but good, leaving the heroes with only the help of a bad-ass warrior woman named Jaylah (Sofia Boutella), the crew’s plucky resolve and the use of multiple 80s/90s-era rap tracks.

Within the first 20 minutes, it’s obvious that a die-hard Trek fan had a hand in writing this. That would be Pegg, who clearly understood the need to set this adventure in medias res, as feeling like these characters have served together for years endows their interactions with more meaning. Wisely, the script splits the cast, pairing Bones and Spock together to gleefully grumpy effect and grouping Kirk with Scotty, Chekov and Jaylah. And blessedly, Elba cuts a delicious villain, albeit one buried beneath a spaceboat-load of makeup (sorry, fans-of-looking-at-Idris-Elba).

Yes, the plot is fairly rote; it’s a “save the day,” paint-by-numbers sci-fi blockbuster. But the franchise needed this, thanks to its lack of weekly television adventures. How can any shenanigans stand out if audiences only ever see the Enterprise’s staff confronting their biggest adventures? Some entries in a (hopefully) long-running series need to do yeoman’s work (or “red shirt” work, to use Trek parlance). Nobody will likely consider Star Trek Beyond the crown jewel in the property’s cinematic crown, but it’s a perfectly delightful little gem, content to bedazzle.