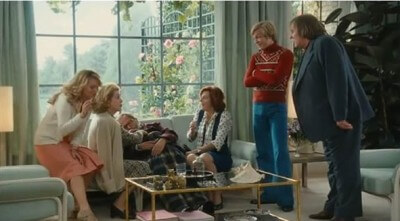 Film icon Catherine Deneuve’s first major role was as an umbrella shop sales girl in the 1964 Jacques Demy film The Umbrellas of Cherbourg. Now, nearly a half-century later (with a enormously successful career in between), she can be found playing the unappreciated wife of an umbrella factory owner in Potiche, the latest picture from François Ozon. Potiche is French slang for “trophy wife,” and it aptly describes Deneuve’s character Suzanne Pujol when we meet her. She’s out for a morning jog but apparently is able to do so without any amount of effort or care. Her tracksuit is spotless, her hair is perfectly coiffed, and her rhythmic exhalations feel more like an accessory than a physical obligation. She even pauses to greet the Disney-esque animals who’ve come out to say hello and scribbles down a few lines of poetry about them before returning home. Things are much less pleasant at the home Suzanne returns to. Her husband Robert (Fabrice Luchini) is a curt man, to put it kindly, and so gripped by hypertension that everyone tiptoes around him as if he were a time bomb. Daughter Joëlle (Judith Godrèche) is kinder but openly hostile towards her mother’s stubborn complacency. Jérémie Renier rounds out the family as her son Laurent, the sympathetic pacifist of the Pujol household. When Robert’s angry heart finally does give out (temporarily), Suzanne finds herself suddenly managing the umbrella factory and trying to negotiate her way into the good graces of the workers, who are currently on strike. Luckily, Mayor Babin (Gérard Depardieu) is an old flame who’s willing to help, even though he’s a tough old lefty, and therefore opposed to the Pujol’s privileged way of life. Suzanne’s forced submission in a male-dominated society that’s just beginning to flirt with the idea of change is obviously serious stuff. But with Ozon’s light, almost carefree touch, this story of a woman’s journey to empowerment becomes the kind of charming comedy of manners that the French do so well. Potiche is no history lesson anyway, and Ozon is far more interested in playing around with 70s-era visual kitsch (the movie is packed with big colors and split screens) and showcasing his two stars. The bear-like Depardieu is fantastic, huffing and puffing around as the lovelorn mayor. He looks a lot different from the transcontinental heartthrob of earlier years, but he’s one of those actors who (like Jimmy Smits) seems to get more interesting with every pound he gains. And Deneuve, still immaculately elegant as she nears 70, proves to be as powerful a screen presence as she ever was and carries the whole picture effortlessly. And it basically is all on her shoulders. Because even with all its socio-political subject matter, as you wade through the disco soundtrack and the compulsive costuming, you realize that there isn’t much else of substance. On the other hand, if Catherine Deneuve isn’t reason enough to go see a movie, then what is? Potiche may be an inconsequential cinematic confection, but it’s fun while it lasts. Grade: B-