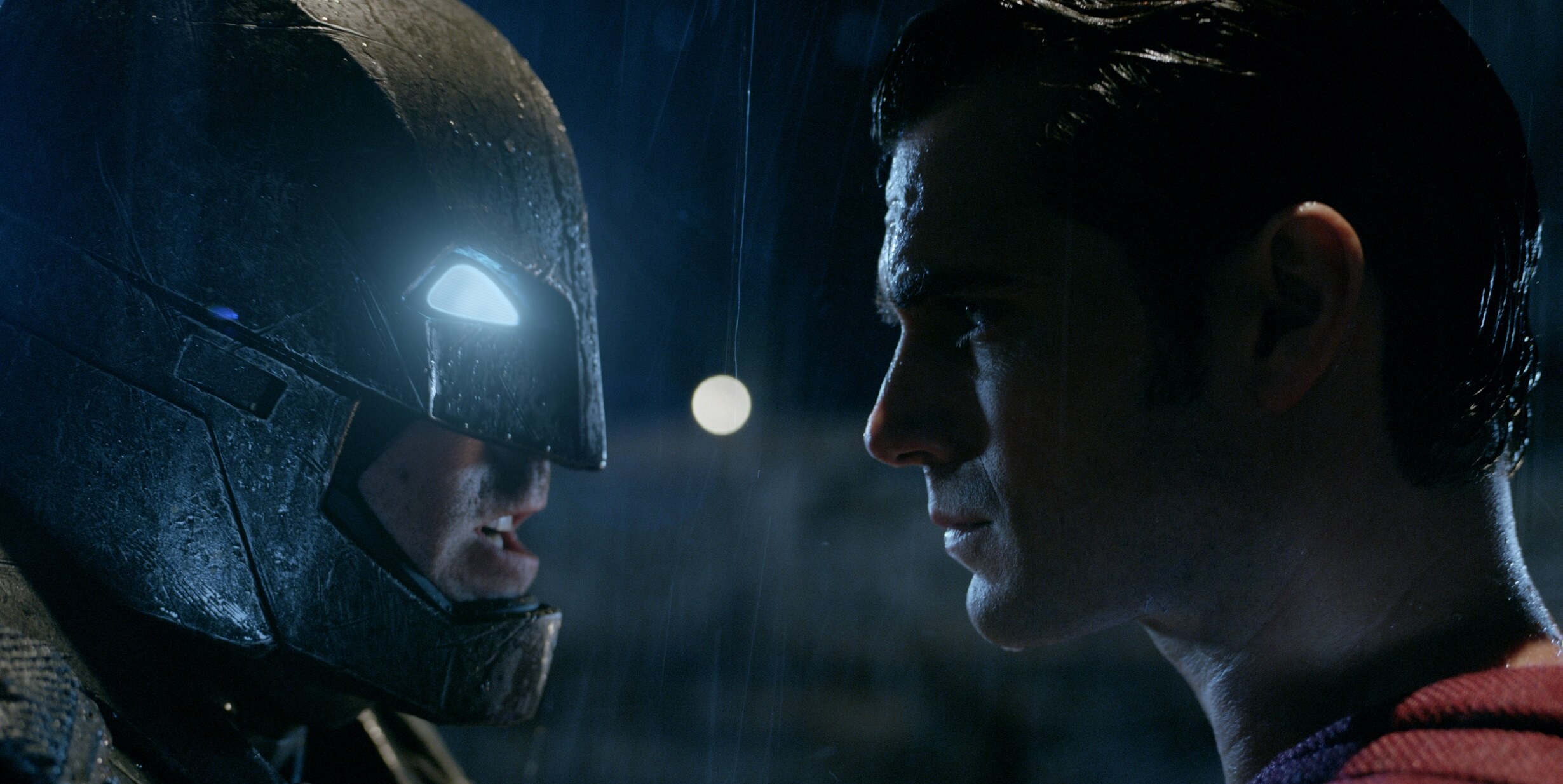 The infinite monkey theorem holds that monkeys randomly typing on keyboards for infinity will eventually produce the works of Shakespeare. Batman v Superman: Dawn of Justice would have been better off choosing any of the non-Shakespearean, random keystroke, monkey scripts. What writers Chris Terrio and David Goyer have done here is an unspeakable disservice to beloved characters, talented actors and a public poised to dump truckloads of money watching one of the ugliest, lamest wastes of time to ever dare call itself a movie.

The first hour-plus of this bloated, arrogant shitshow could be condensed into maybe two sentences: Superman (Henry Cavill) is beloved by some, feared by others and framed (in ways that still don’t make sense) for interfering or not interfering in a terrorist conflict in Africa. Batman (Ben Affleck) hates Superman because he blames him for civilian casualties during the battle with Zod in Man of Steel and sets out to steal kryptonite from Lex Luthor (Jessie Eisenberg) to kill Superman. Those 2 sentences take 75 minutes to accomplish.

From there, it’s all grunting and fighting, as Batman douses Superman in a kryptonite fart and the two dosey doe for a hot minute, frowning and grimacing in a flawed, ineffective attempt to prevent homoerotic fan readings of their testosterone-fueled tension. Then Lex creates a violent creature that looks like the Incredible Hulk’s turd, and Wonder Woman (Gal Gadot) shows up to hit it, while explicitly stating that hitting it only makes it stronger.

If you set out to intentionally make a movie as bad as BvS, you couldn’t. Eisenberg’s spazzy, hammy twitching makes Johnny Depp’s Willy Wonka look subtle and restrained. Affleck and Gadot acquit themselves just fine, especially considering the dumpster-fire screenplay, and Cavill’s Superman is the victim of director Zack Snyder’s Ayn Randian philosophy, which holds that altruism is for chumpsuckers. Superman is the ultimate altruist, a self-sacrificing savior intended to represent the virtue of a life lived in service to others. Getting a guy who wants to adapt “The Fountainhead” to direct a Superman movie is like hiring Donald Trump to write erotic poetry about Ted Cruz’s wife.

Boring, loud and uninspired, this is a collection of nonsensical scenes, featuring at least two dream sequences and one hallucination. With nary an explanation for Lex’s motivations or Wonder Woman’s sudden appearance, the script chose to spend time giving us the eleventy billionth recreation of Batman’s parents getting whacked and a multipart “jar of pee” joke. The setup for the Justice League movie was tactlessly crammed in, an artless “muffin top” that could not possibly generate excitement.

Nothing worked. Nothing. The small stuff sucked, like Perry White (Laurence Fishburne) barking awkwardly embarrassing attempts at modern news jargon or Lois Lane (Amy Adams) managing to appear naked and wet and then just wet. The big stuff sucked, like the anticlimactic titular fight and the final battle with Poopzilla. Everything sucked. Some diehard DC comic fans will try to do mental gymnastics to describe the crap biscuit they were just force-fed as delicious. They shouldn’t. They should demand better. And “better” than this shouldn’t be hard.