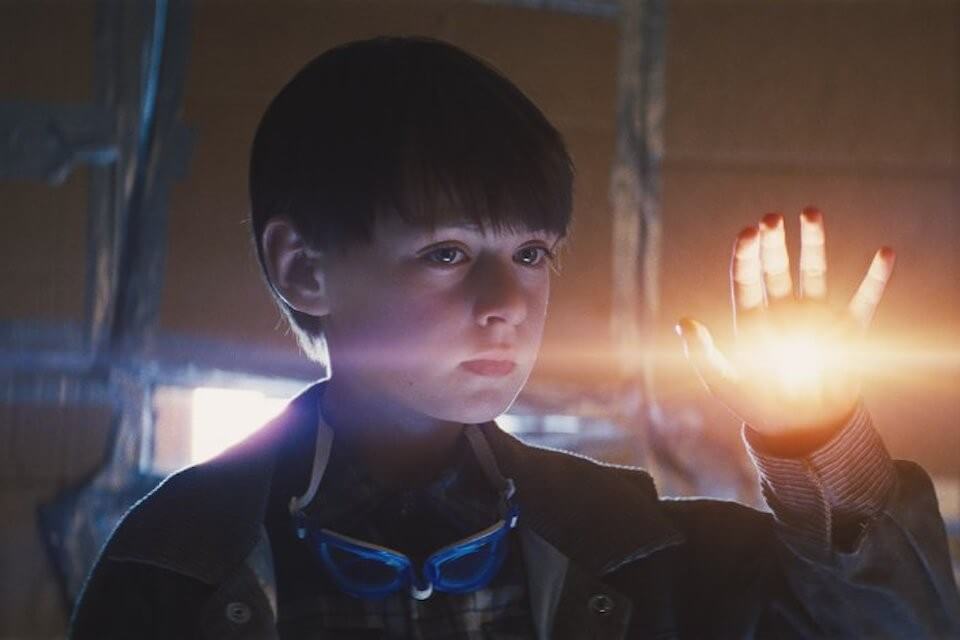 Theoretically, dumping chocolate syrup on top of M&Ms on top of Oreos on top of cookie dough on top of fudge technically tastes “good.” You just don’t get an actual dessert if you do that. What you get is…well, what you get is diabetes, but that’s beside the point. Midnight Special is like that ooey-gooey confectionary abomination: it’s hard to dislike any individual component, but it’s all just kind of congealing in a nondescript pile of…you know what, still diabetes.

Alton (Jaeden Lieberher) is an 8-year-old boy who can do some significantly freaky shit. He can barf blue light on you from his eyes and make you see things, can crash satellites from orbit into gas stations and can create enormous glowing bubbles not unlike some kind of Dutch oven filed with magic fart. None of it makes sense really, but it’s easy to roll with it. His father, Roy (Michael Shannon), and Roy’s old buddy, Lucas (Joel Edgerton), kidnap Alton from a cult known as “The Ranch.” They soon join up with Alton’s mom, Sarah (Kirsten Dunst), in an attempt to outrace authorities and cult members to get to some place to do some thing at some time, none of which ever really makes sense.

And that’s Midnight Special: a terse, often tense, slow-motion chase that features the tamest performance Adam Driver is likely to ever deliver. The good news is writer/director Jeff Nichols skews far closer to his stunning Take Shelter and further from his misogynistic tripe Mud. The bad news is, the thematic explorations that made the former movie so durn good are wholly absent here. Worse yet, insanely complex, fascinating philosophical issues are frequently tantalizingly teased, only to be shut down fast enough to warrant an intellectual “cold shower” to cope with the never-consummated narrative temptations.

Consider that the opening posits a gleeful sci-fi query: What if a religious cult actually did find a special child and wasn’t just making shit up? But that angle up and disappears instantly, only to be replaced by the implicit suggestion that “God” and “angels” may just be interdimensionary beings. Cool! But then that gets dropped like a hot potato covered in cooties in favor of a modern day “Mary and Joseph” contemplation. Which then gets punted for a low-key take on Alton as Kal-El from Superman. Which immediately gets trashed and… You get the idea. It’s a lot like frantically tearing through a set of Russian nesting dolls in a frantic attempt to get at the candy at the center; but there is no candy. It’s just a Tic-Tac. And sure, Tic-Tacs are fine, but if you’re expecting actual candy, a Tic-Tac may as well be a hot booger.

Look, Midnight Special is fine. Good even. It’s a Tic-Tac. It’s just that it’s buzzing and percolating with creative juju that never delivers. The ending is less “shock and awe” and more “Oh. Okay. Neat?” Original sci-fi is one of the most fertile and gorgeous creative genres, allowing dreamers to deploy limitless imagination to explore whatever revelatory theme they so choose. If only Nichols had, you know, picked one.