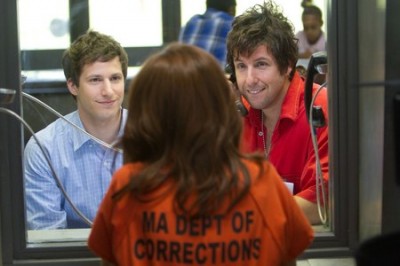 That’s My Boy isn’t just so bad that you would rather play a fun game of “scratch my retina with chicken wire” for 90 minutes; it’s so bad that writer David Caspe and director Sean Anders should be legally prosecuted for crimes against humanity. If this is what we’re capable of as creatures living in a (relatively) free society who have evolved to the point where we are afforded the luxury of creative expression, then we deserve the inevitable zombie apocalypse or thermonuclear war that’s coming. You hear that, divine creator? Rapture us! We’re ready down here!

In a movie that jokes about childhood sexual assault, incest, racism and inappropriate encounters with grandmothers, the most offensive thing is Adam Sandler. Wearing what seems to be a coward’s attempt at a mullet, Sandler does a bad impression of a guy doing a bad impression of Mark Wahlberg. He plays Donny, who became hugely popular in 1984 because he procreated with a teacher when he was just a young teen. Because sexual assault is hilarious so long as the teacher has big hooters.

The seed of Donny and his molester, his son Todd (Andy Samberg), distanced himself from his layabout father and became a hedgefund manager about to marry a beautiful, depraved woman named Jamie (Leighton Meester).  Donny is going to go to jail for tax evasion unless he can pay off $43,000 by Tuesday, because that’s how the IRS works, so he decides to find his long-lost son. This is part of a plan to get Todd to agree to a lucrative TV special featuring a three-way reunion with his mother and Donny. Along the way, Milo Ventimiglia, James Caan and various others debase themselves in ways for which they shouldn’t be forgiven.

Inexplicably, the film is populated with cameos from the sports world, including New York Jets football coach Rex Ryan, radio host Dan Patrick and infamous reporter Erin Andrews. Because what you want to do when making a movie is find the maximum number of people who can’t act and give them prominent roles, which explains why Tony Orlando, Vanilla Ice and Todd Bridges are also present. Despite this, That’s My Boy isn’t even entertaining in the same way as a “shock act” at a carnival. This is more like the sheer inhumanity of watching a YouTube video of homeless people fighting.

Comedy should have no boundaries save one: be funny. It’s okay to be politically incorrect about race if the punchline is either revelatory and insightful or hilarious. Having a character say, and this is the edited version, “These people are effing lucky to be in our effing country, so treat them however you effing want” and then cutting to a shot of two Asian servants looking sad is whatever the opposite of funny is. Genocide maybe? Is genocide the opposite of comedy? Then this is cinematic genocide.

This is without mentioning the “twist” that occurs in the third act, a moment that forever establishes Sandler and his crew as having lost touch with what it means to be human. That’s My Boy is the worst movie in memory, worse even than Dark Shadows, which took some serious doing. Please, don’t even see it as a curiosity for fear of encouraging the humorless, simple-minded, depraved sons of bitches who made it.