Home » Film » The Bald and the Sweaty 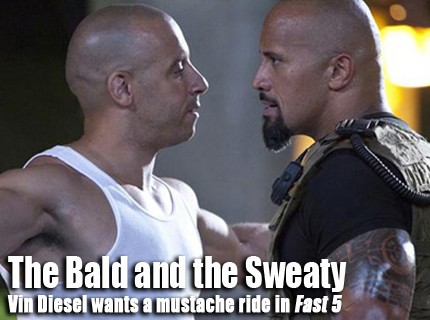 In each installment of the long-running 007 series, you anxiously anticipate hearing the deliciously droll namedrop: “Bond, James Bond.” In each installment of the inexplicably long-running Fast and Furious series, you anxiously anticipate the moment in which the two bro-tastic, muscle-milk-enhanced non-characters look like they’re about to finally drop the pretense and make out. If repressed homoerotic tension is the measure of success for the films in this franchise, Fast 5 is a masterpiece.

Connoisseurs will tell you, pound for pound, 2 Fast 2 Furious featured the most near-miss dude-on-dude action; Tyrese Gibson ditched his shirt like Matthew McConaughey was costume director and Paul Walker sent his bro-star more “it’s cool to round third” signals than a baseball coach. But Fast 5 brings it, with a lip-quivering Vin Diesel coming one gravelly whisper away from the furry mouth of a sweaty, roid-a-rific Dwayne “The Rock” Johnson.

Will they? Won’t they? They won’t. Just like the audience for professional wrestling, the overtly testosteroned core fans of the series would riot if they were ever actually forced to realize the inherent gay-ness of the thing they love.

Why talk about this? Well, first off, it’s hilarious that a fan-base who probably hasn’t hit too many PRIDE rallies is being exposed to back-door homoeroticism. And second, if you want to contemplate and talk about Fast 5 for more than a fast five minutes, you’re going to have to get more creative than did writer Chris Morgan.

Apparently, Morgan has created an entire Fast and Furious mythos, with Fast 5 actually taking place before The Fast and the Furious: Tokyo Drift (the third film) but coming after Fast and Furious (the fourth film). If you’re concerned about keeping the events straight, please reevaluate your life. Sweaty dudes drive cars, steal things and make out with hot chicks while likely thinking about dudes. The end.

In this installment, Brian O’Conner (Walker), who was an undercover cop, then wasn’t, then was again and now isn’t again, breaks his beloved, er, “buddy” Dominic Toretto (Diesel) out of jail. He does this with the help of Dom’s sister, Mia (Jordana Brewster), who Brian impregnates to prove he’s straight. They free Dominic by flipping the bus he’s being transported in a thousand times. He doesn’t die, because whatever planet the Fast and Furious series takes place in doesn’t observe physics.

The whole gang escapes to Brazil. A fact you’re reminded of by 15 establishing shots of the famous Jesus statue. They’re broke, so they agree to steal cars … only to find that the cars are owned by a criminal kingpin named Reyes (Joaquim de Almeida). When Reyes’ men kill DEA agents and pin it on Dom and Brian, Hobbs (Johnson) is sent to kiss them, er, catch them. So while those durn Duke boys stir up trouble with some old buddies, including Tyrese and Ludacris, Hobbs tries to nab them and Reyes tries to kill them while they all try not to make out.

Director Justin Lin, forever a God based on his directing the classic paintball episode of “Community,” nails the action. From the opening sequence that flips the bird to gravity and mortality to the final set piece that sees the anti-heroes dragging a jillion-pound safe with two sports cars, it is awesome summer movie, car-based carnage at its finest. In an age dominated by CGI shenanigans, real stunt work and balls-to-the-wall fisticuffs actually feels new again.

Fast 5 has a weaker foundation than Donald Trump’s presidential platform and offers nothing to humanity but further proof we’ve mastered punching stuff. But it’s light, fun and kinda gay, which also makes it incredibly watchable.