Home » Film » The Bell of the Bawl 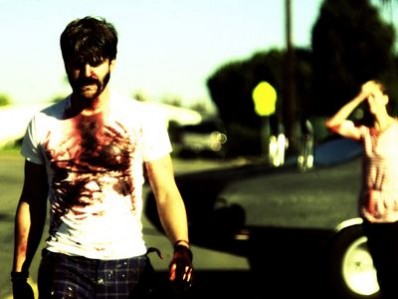 Bellflower wants badly to burn. It so yearns to catch fire that cinematographer Joel Hodge appears to have frequently smeared ash on the lens and scrambled the color palate, so that bright reds and oranges practically ignite the screen. Alas and alack, beyond a sizzlin’ visual look, Bellflower is less flame and more smoke … derivative, borderline misogynistic smoke. It feels dirty taking a first-time writer/director/actor as clearly talented as Evan Glodell to task, but here goes.

Bellflower is the kind of movie where the lead characters are named Woodrow (Glodell) and Milly (Jessie Wiseman). Woodrow and his buddy, Aiden (Tyler Dawson), don’t appear to have jobs or an interest in showering. Instead, they channel all their dudely-dude energy into building a flame-thrower and pimping out a muscle car because they loved Mad Max so much. The entirety of Bellflower’s advertising has been dedicated to this car and the postapocalyptic imagery associated with it. This is presumably because the alternative was admitting the film is really a slightly demented romantic hissy fit.

Skipping backward and forward in a failed attempt to mask inconsistent writing, Bellflower belches and lurches into an insane third act that is so plump with spoilers it’s impossible to discuss without “ruining” it. Ruining, of course, being a matter of opinion. Let’s just say that potentially relegating things to imagined fantasies doesn’t make watching a woman being simultaneously raped and murdered any more palatable. In fact, it just makes the writer/director a pansy for at least not standing behind his choice to make audiences watch this vile shit.

Crap, that was already mentioned above. Hey, it’s hard to interrupt a steady stream of negatives with a compliment when so much is so very terrible. From Glodell’s squeaky voice, which negates much of his character, to Dawson’s repeated bludgeoning line delivery, the acting is no source of pride. Even Wiseman, who gives a thankless and fairly fearless performance, is trapped by the confines of an ugly character. Whoever hurt Glodell in real life apparently stunted his perception to write women as, you know, people.

There’s more, but you get the point. People are buzzing about the car they built to use in the movie for a reason. To talk about anything else is to be forced to discuss cry-baby love-life bitching from semi-hipsters who seem to have a low opinion of women. As much as it’s nice to see companies like Oscilloscope take a shot by distributing artists like Glodell in an attempt to find the next vibrant voice, Bellflower is a whiny whimper, not a bang.