Home » Film » The Business of Being Boned 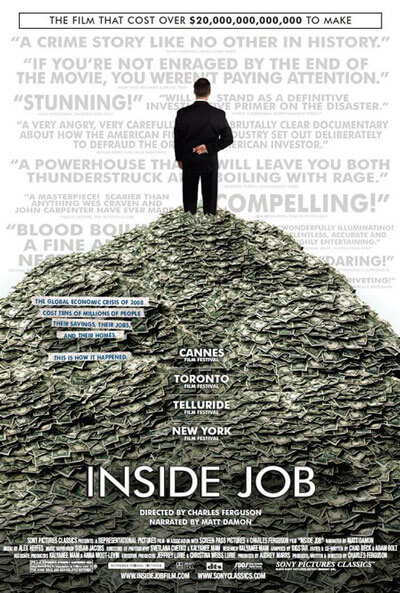 Not angry enough at how poor you are? Enjoying your unemployment too much? Having a great time with foreclosure? Check out director Charles Ferguson’s Inside Job for 120 minutes that will turn the most mild-mannered, tax-paying Bruce Banner into a Wall Street–smashing Hulk. Not a green Hulk, though, because there’s no green left.

Writers Chad Beck and Adam Bolt and Ferguson have crafted a graceful, elegant PowerPoint lecture, an economic crash-course detailing the course of the crash. The film is so dense that projectors may buckle while unspooling it, but this dogged thoroughness doesn’t let a single obtuse term slide past viewers. Want to finally understand what the Sam Hell a derivative is? Ferguson and company have the graphics to show you in graphic detail the tools that were used to sodomize our entire system.

This trigger of accurate, well-explained evidence fires a bullet of blinding rage. Matt Damon’s comforting, dulcet narration doesn’t soften the blow, nor does it make the information accumulation any easier … especially when the soundtrack alternates between notes borrowed from a melodramatic tragedy and those taken from a horror-thriller.

Trying to completely explain a global financial apocalypse decades in the offing inside a few hours proves exhausting. Bullet points, however, are easy. Everybody involved knew they were doing bad things, lots of them did blow and banged hookers while slapping at your 401K like a whack-a-mole, and the government passed laws to make all of these things easier. The end.

Millions of Americans feel as though they get it, convinced that nightly news sound bites are sufficient explanation. They’re wrong. The economic collapse happened precisely because people don’t understand these financial shenanigans. But it’s our money, our lives and our jobs that suffer for this willful ignorance.

Dressed up with well-edited visual gloss and appropriately indignant one-on-one interviews, Ferguson’s documentary will wrinkle your brain and piss you off. Yup, watching Inside Job is no damn fun. It is, however, damn crucial. Why? Because nothing has changed, nothing is fixed yet, because nobody who did what they did has really paid the price for any of it yet … because it could easily happen again.

An educated public is a Wall Street thief’s kryptonite. So set aside a few hours and get ready to do some heavy mental lifting. Or don’t, and be forced to keep trusting the people who are telling you that they have everything under control. Your call.