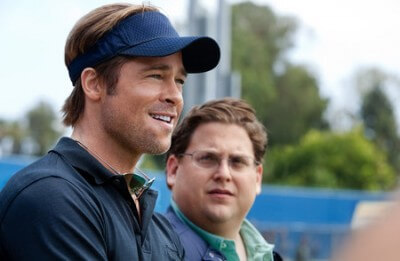 “It’s hard not to be romantic about baseball.” Or so drawls Billy Beane, the restless Oakland Athletics general manager depicted in “all caps” by Brad Pitt in Moneyball. It’s a hard statement to deny, whether or not the phrase “America’s pastime” even means anything in our always-connected, always-at-war modern age. That conflict—idyllic nostalgia versus cruel reality—is the secret core of this slightly better-than-average sports drama.

Adapted from Michael Lewis’ book, Moneyball chronicles Beane’s attempt to use unconventional statistical analysis to build a winning team on a budget far less than their wealthier competitors. A young economics grad, Peter Brand (Jonah Hill), gets him hooked on the idea after the A’s lose their best players to richer teams offering bigger salaries.

Because their plan seems to be failing at first, Billy and Peter spend a lot of time in the A’s dumpy offices, propelling the story forward as if it were a picture about a jewel heist. They frantically trade players over the phone, strategize using computer screens filled with undecipherable numbers and do their best to keep faith in their radical strategy while surrounded by an organization full of nonbelievers.

It’s only natural that most of this movie would take place off the field. Although it shares the same Hollywood highs and lows as any other sports drama, Moneyball is a distinctly 21st century underdog story. And it plays out through cell phones and computer screens more than blood, sweat and tears. Like The Social Network, its closest and superior relative, Moneyball depicts a world where dreams are pursued by way of abstractions: a championship from percentages and number crunching, social acceptance through hedge funds and lines of computer code.

Philip Seymour Hoffman, in a smaller role as manager Art Howe, gives an unexpected reminder of how he grabbed all of our attention in the first place, when he was just another vaguely familiar character actor. Hoffman physically doesn’t look much different here than he usually does, but when we first see him, he is so fully inhabiting this surly, poorly dressed guy that it takes a moment to recognize him.

This is quite different from the impression Pitt leaves. His Beane is always cool, brassy and charming, but rarely authentic. One viewing of The Tree of Life is enough to prove that he is truly capable of greatness. But here, he’s just too aware of his A-list magnetism it to inflate Beane with much depth. This is a performance in line with Soderbergh’s Ocean’s pictures or Tarantino’s Inglourious Nazi hunt; one that’s amusing but ultimately out of sync with a biopic that’s reaching for naturalism.

It is, of course, a no-brainer for baseball fans, or even just baseball movie fans. And it is a solidly entertaining two hours at the movies. But it’s one of those films that captivates and then leaves the sour aftertaste of gold statuettes. It does feel like Oscar season has begun. In light of Moneyball, that’s a conflicted feeling.