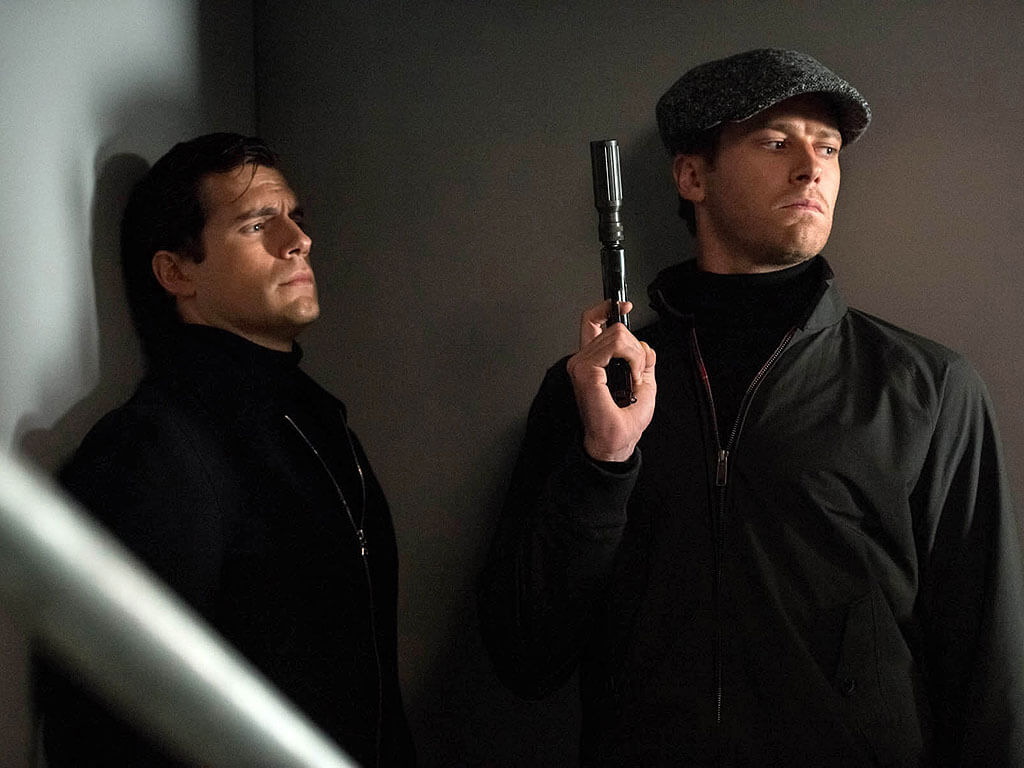 Presumably, a reboot or remake is done to capitalize on the good will and brand recognition of an intellectual property. Do fanboys of the 1960s TV show “The Man From U.N.C.L.E.” exist? Does anyone remember anything about it, other than it sporting a weird acronym for no good reason? “You know what’ll put fear into the hearts of evildoers? A spy network named after their dad’s brother!” What’s surprising isn’t just the de-mothballing of a concept no one was missing; it’s that The Man From U.N.C.L.E. is somehow pretty darn good.

Written by a corporate hive-mind but clearly directed by Guy Ritchie, TMFU opens with Napoleon Solo (Henry Cavill) attempting to spring car mechanic and daughter of a Nazi-aiding bomb builder, Gaby (Alicia Vikander), from the wrong side of the Berlin Wall in the 1960s. They are pursued by Ilya Kuryakin (Armie Hammer), a Russian spy possessed of immense strength who is prone to rage strokes. No sooner do Solo and Gaby escape do they find themselves required to work with Ilya. You see, Gaby’s dad has cracked the code for easily enriching uranium and plans to sell it to Nazis.

None of the eleventy billion writers could come up with a believable reason this operation had to be a joint one between the United States and Russia, but who cares. The film’s best moments are Cavill’s cowboy and Hammer’s Russkie robot mocking one another while Vikander quietly keeps her eyes on the prize. The prize, in this case, being the bomb that femme fatale Victoria Vinciguerra (Elizabeth Debicki) is hawking. Oh, and Hugh Grant shows up to blink a lot.

Let’s work backwards from the biggest flaw: TMFU is about a half-hour too bloated. It’s not that the running time is inappropriate, it’s that this is supposed to be a breathless, jazzy romp. Ritchie forgets this sometimes, shoehorning in admittedly awesome scenes that simply don’t belong. For example, how does a stylish, flirty spy movie contain one of the more ooky torture sequences, complete with a Nazi gleefully recounting concentration camps stories with a scrapbook? Wrong film, Guy, even if the scene itself works in isolation.

But enough about what’s wrong, let’s talk about why TMFU deserves your love. This should be a breakout turn for Cavill, the Brit who currently holds the Superman mantle. His suave superspy is a breezy American 007, as comfortable in a fist fight as he is discussing high fashion. Hammer’s Ilya is endearingly blunt and delightfully and stereotypically Russian. Remember, this isn’t reality, this is Cold War fantasy filtered through a nostalgia no one could have expected back when nuclear winter was coming.

Ritchie’s hyper-stylized action fuses Saul Bass imagery with live-action. And the film is jam-packed with gleeful little moments, like Ilya and Solo having a pissing contest over whether Gaby’s belt must match her dress. TMFU seems to be completely absent of any buzz, but it definitely deserves it. So let this be the first you hear: buzz, buzz, go see it.