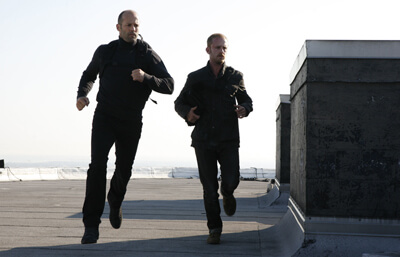 Things you’ll never hear: “I want to see that new Victorian-era romance starring Oscar-winner Jason Statham.” J-Stat is so synonymous with cinematic violence, someone should update the Wikipedia entry for “action movie” so it’s just a picture of his grimacing, bald cabeza covered in blood. In an ever-changing world, the only constant is Jason Statham’s movie murder spree.

The Mechanic is not a mold breaker, game changer or, you know, “good.” This isn’t to say it isn’t sporadically adrenaline-inducing and visually striking, aspects that do add up when using an action-movie abacus to keep score. Had it adhered to the age-old “Mortal Kombat” adage — “Finish him!” — and delivered on the final scenes, it coulda been a guilty pleasure-contender. Instead, it’s just another entry on Statham’s IMDB murder vita.

The only way it should have taken two people to write The Mechanic is if they split up who got to use nouns and verbs. And yet, somehow both Richard Wenk and Lewis John Carlino are credited with creating the world of Arthur Bishop (Statham). Bishop lives the obligatory hit man’s existence, filled with abundant isolation and requisite affinity for artsy hobbies. His only friend is Harry (Donald Sutherland), so of course he is forced to kill him in the first 10 minutes.

Feeling guilt over offing his one buddy, Bishop takes in Harry’s freaky son, Steve (Ben Foster), who has no clue who popped his papa. Bishop begins mentoring Steve in the life of an assassin … because you definitely want to train a psychopath with anger management issues on how to best murder people after you’ve killed his father. When the man feeding them assignments betrays them, they begin the long walk to Revenge City down a road of bruised knuckles and cracked craniums.

Director Simon West made the opposite film to director Anton Corbijn’s The American . Whereas George Clooney bangs hookers and slowly builds a gun he never uses, Statham bangs hookers and uses guns all of the time. The American is quiet contemplation (meaning boring). The Mechanic is loud violence (meaning stupid). If they could make a baby, it’d be one hell of a show.

Although the first act drags while the film mildly paws at character development nobody expected or needed, the second contains brawls sure to coax a few “oohs” and “daaaamns” from crowds who were properly prepared. With Foster as one of the best in the biz at going loony, and Statham owning a PhD in face-kicks and stabbing, things trend upward … until they abruptly stop. As though funding ran out, the climax is lethargic and passive, separating two characters the movie spent its running time bringing together.

Judging it as it asks to be judged, The Mechanic is a near-miss. It’s a bloody diversion not epic enough for awesome and not asking to be considered anything substantial. Sleep easy knowing that in this uncertain era, Statham keeps on keepin’ on, putting his fists into skulls so others don’t have to.