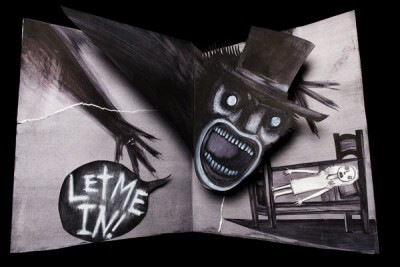 Amelia (Essie Davis) is a widow trying to raise an incredibly difficult child, Samuel (Noah Wiseman). The boy is ensorcelled by monsters, prone to spastic behavior and obsessed with his dead father. Amelia is hanging on by a thread, working herself to the bone at a nursing home while up all hours of the night with a son she’s beginning to resent. Samuel is convinced that he will have to protect his mother against a supernatural attacker, so he continues to build weapons, which gets him kicked out of school and sends Amelia into a panic.

Then they find the book.

“Mr. Babadook” is a pop-up children’s book that would be at home in Hell’s pediatric waiting room. A trench-coated beastie with knives for fingers, the promise Mr. Babadook makes is that once you’ve seen or heard of him, you can’t get rid of him. At first, Amelia is quick to reprimand Samuel for believing the ominous tale; that is, until she hears the clawing at the door.

Let’s check this box first: The Babadook is scary. It’s very scary. It achieves that scary with restraint and skill, largely forgoing “jump scares” in favor of methodical terror. Kent conceals and reveals with masterful timing; some of the most terrifying moments occur with nary a Baba or Dook present. Were it simply frightening, The Babadook would have to be considered a success, as the horror genre uses “pant-wetting terror” as its barometer of success. But this is so, so much more than that.

This is a film about grief and what the inability to eventually welcome that emotion into the basement of one’s heart does to a person. It is also a movie about how incredibly difficult being a parent to a troubled child can be. The frustration, the absolute agony of Amelia pleading with Samuel to behave, to “just be normal,” is raw and palpable. She knows it’s not her son’s fault that he’s “like this,” but that doesn’t make her sleepless nights and public shaming any easier. Ultimately, The Babadook is a story about the ability of love and compassion, of bravery and family bonds, to overcome the most unthinkable of tragedies and the most immeasurable pain. And it’s a friggin’ horror movie.

Whatever Kent does for her second film, be it a documentary on navel lint or a four-hour Victorian-era romance, I’m there. The Babadook is a reminder that what makes a film truly great transcends genre. Good storytelling is good storytelling, even if that story features a pop-up demon who scares the pee out of me.