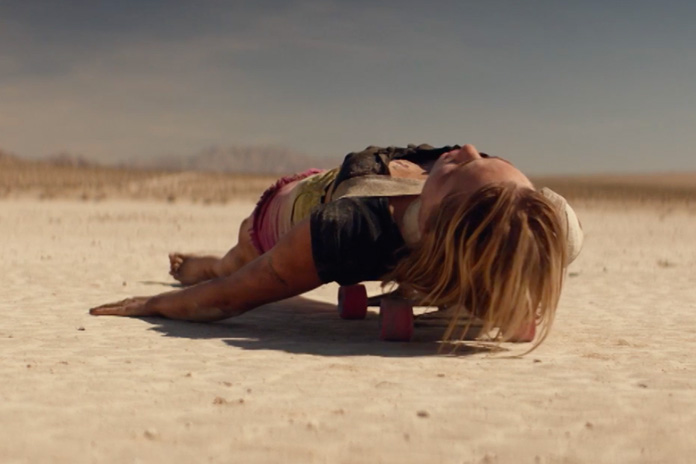 Between Jason Momoa as a sensitive Bob Ross‒wannabe who mumbles in Cuban when not eating people and Keanu Reeves as a lazy Pablo Escobar‒wannabe who mumbles in Keanu-ese when not throwing raves, The Bad Batch should have been a wickedly weird cocktail of WTF. Writer/director Ana Lily Amirpour’s first feature-length jam, A Girl Walks Home Alone at Night, was brilliantly atmospheric and effortlessly cool. Her sophomore endeavor is passably atmospheric and laboriously cool, never fully submerging viewers into the redundantly stylish bath that’s ever-so-slowly drawn.

The first half hour or so is frickin’ near-perfect tho. Arlen (Suki Waterhouse) is one of “the bad batch,” refugees expunged from civilization because they’re seen as dangerous, stupid or dangerously stupid. In a stunning, layered sequence that invokes everything good about Amirpour’s first film, Arlen is nabbed by cannibals. Ace of Base’s “All That She Wants” plays as she gets dismembered, which is still less painful than listening to that band’s remaining discography. After getting clever with poo, Arlen escapes.

Flash forward a short while, and Arlen’s still understandably pretty durn pissed. When she sees a cannibal lady (Yolonda Ross) and an adorable kiddo (Jayda Fink) dumpster diving, she gets all revengy. Psychotic murderer and worried daddy, Miami Man (Momoa), sets out to find the now-missing child. Meanwhile, Arlen grooves and gobbles acid at a rave thrown by The Dream (Reeves), who is like a sluttier Immortan Joe from Mad Max: Fury Road. Described as a “love story,” the film’s final hour does nothing worth much affection at all.

The Bad Batch is, frankly, just not that great. To be sure, a misfire from an artist as talented as Amirpour is still hypnotically watchable. For the love of Aquaman, Momoa butchers human flesh listening to “Karma Chameleon!” From the offbeat music cues to neon-on-sand vibrancy, things almost click. Almost… And perhaps that’s more frustrating than anything. Amirpour extends an invitation to live for a few hours inside a cultivated sensation, which is the hallmark of the best original filmmakers. It just sucks that the sensation here is objectively generic.

Nothing about this effort negates the immediate excitement that should be felt upon the announcement of Amirpour’s next project. This is just a case of a film aiming for “feel” and tone over text and narrative, only the “feel” and tone aren’t particularly captivating. You can almost hear the riffs on the fusion of cannibalization and carnal desires, the oppression of social norms, and family values but they ultimately sound like muffled mutterings.

The best point-of-comparison may be writer/director Richard Kelly’s Southland Tales as a follow-up to his Donnie Darko. The Bad Batch may not make Momoa sing, but what Kelly did to Justin Timberlake Amirpour does thrice over to Jim Carrey, whose performance is only genius if you imagine it as the final incarnation of Ace Ventura. An interesting failure is still infinitely better than most well-constructed, derivative garbage, but The Bad Batch is likely only a temporary misstep for a creator this uber-talented.