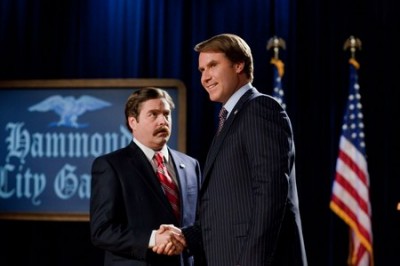 It seems like an odd way to start a review for a movie in which Will Ferrell tries to make Zach Galifianakis touch his testicles on stage during a debate, but The Campaign has a clever message. Writers Chris Henchy and Shawn Harwell move beyond the standard skewing of attack-ad politics and candidates that are either incompetent or lecherous. Oh, sure, they have fun with the Scarecrow and the Cowardly Lion, but the villains are the ones shouting “pay no attention to the douchebags behind the curtain.” Those douchebags, of course, being Dan Aykroyd and John Lithgow.

This is a R-rated raunchy response to the Supreme Court’s Citizens United ruling, the one that reaffirmed companies are people and, because companies speak in the language of money, curbing their donations is an infringement on free speech. All you need to know about the reaction is that it is literally the one bipartisan conclusion the country has reached in forever: everybody hates it. So even if it seems like director Jay Roach’s consistently amusing election-year romp is a generic “stay true to yourself” political morality play, it isn’t. Stay through the credits if you don’t agree.

Although the affectations of incumbent Congressman Cam Brady (Ferrell) are pure George “Eight years was awesome, and I was famous and I was powerful” Bush, his flaw is purely Clintonian: he like-a the ladies. He and his campaign manager, played by the deadly-in-a-supporting-role Jason Sudeikis, expect to run unopposed in the general election. But when The Motch Brothers (Lithgow and Aykroyd) see a chance to manipulate the election in order to put a politician in their pocket who will vote to open a sweat shop in North Carolina, they sink their fortune into Marty Huggins (Galifianakis).

Huggins has a proud GOP family name, but is himself a friggin’ weirdo. So The Motches send master image craftsman Tim Wattley (Dylan McDermott) to fix up their would-be puppet. It’s not easy, considering that Huggins is prone to wearing a fanny pack and introduces himself to the political scene with a lengthy story about his pugs eating snacks under the couch. With Brady committing stupider and stupider transgressions, including punching a baby in the face, the race tightens and the laughs come loose.

Galifianakis is at his best here, doing the kind of comically nuanced version of method acting. He got laughs in one scene simply for how he sat down. That’s impressive. He has been neutered in other roles, but this is a reminder that when he can unleash his inner Andy Kaufman and go full Tony Clifton, things couldn’t be better. The same can be said for Ferrell, who is so often forced to be a eunuch of a leading man that it’s easy to forget he’s funniest when he lets it all hang out and gets mean.

None of it is sophisticated or original, but that doesn’t mean it’s not clever. There’s a reason the Motch Brothers rhyme with the Koch Brothers, the real-life billionaires influencing real-life politics with real-life money. And by the end of The Campaign, it becomes obvious that this isn’t politician versus politician but an “eff you” to Scalia and his gang. And working that message into a movie with jokes about defecation while getting tickled is always going to get a recommendation.