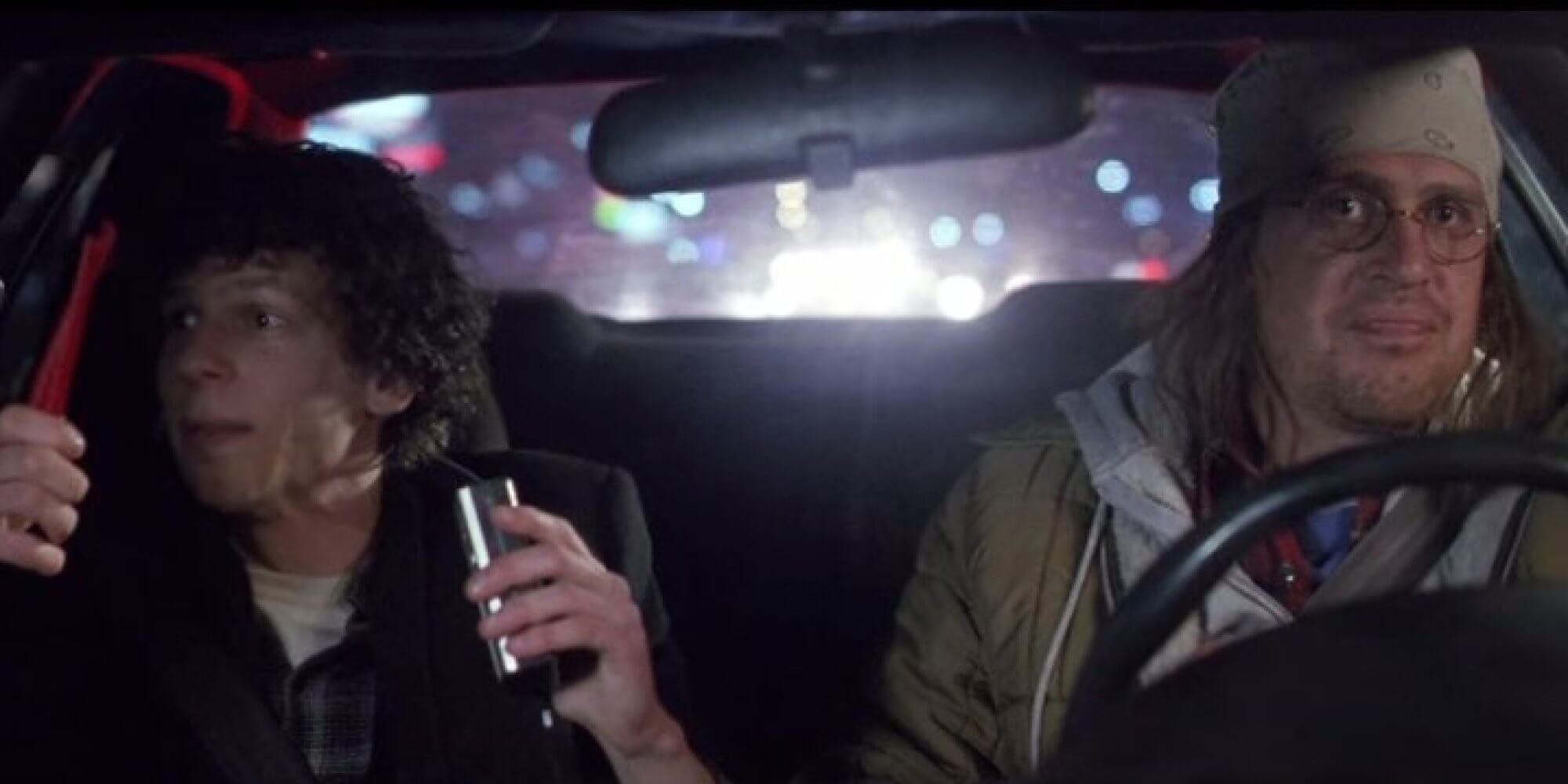 Director James Ponsoldt’s The End of the Tour is a movie about two writers talking to each other for five days and not much else. They talk about everything we’ve come to expect that writers in movies are going to talk about. But, don’t worry, The End of the Tour is not nearly as meh as it sounds. Sure, I won’t lose any sleep if I never again see a movie where two writers discuss the cult of celebrating or the human condition, but I’m glad that I’ve now seen iterations of those conversations that don’t make me throw up in my mouth.

The End of the Tour is based on a 2010 memoir by David Lipsky (played here by Jesse Eisenberg) about the five days he spent interviewing author David Foster Wallace (Jason Segel) for Rolling Stone after Wallace was catapulted to superstardom by his encyclopedic novel, Infinite Jest. It’s framed as something like a road trip movie, although it mostly reminded me of the first season of HBO’s True Detective with how its only concerns were the exchanges between the two leads; the other elements (plot, supporting characters, etc…) functioned solely to keep them talking.

Around the twenty-minute mark, I knew that I wasn’t watching a great movie but I was watching a movie with a great performance in it. It’s a bit disappointing that The End of the Tour was released a few months too early for serious Oscar consideration because Segel’s performance is so good that he should seriously consider dropping out of comedies to focus on more serious roles. Seriously. Apparently, during the years Segel spent being the least obnoxious character on the most obnoxious sitcom ever and starring in a bunch of comedies that we’ve all happily forgotten, he was struggling to conceal his shades of Day-Lewis. Segel immerses himself into his portrayal of Wallace in a way that few actors are capable of, and the repercussions are felt throughout the movie. He single-handedly turns The End of the Tour into something special.

The movie is at its best when the conversations between Eisenberg and Segel continue for so long, uninterrupted by awkward feeling movie stuff like story arcs and montages, that the two actors start to feel like something more than characters and something closer to actual people. In one scene, Eisenberg and Segel are lost in conversation when Segel stands up from his seat, crosses the room, and takes another seat—seemingly for no reason. I’ve never seen a movie pick up on the way we loiter and fidget after we’ve been talking to each other for a while like The End of the Tour.

Except for Segel, the rest of Ponsoldt’s movie stops short of greatness and settles for pretty good-ness. The only major misstep is the ending (I promise this isn’t a spoiler), where Lipsky discusses how he was touched and inspired by his interview with Wallace despite us never actually seeing him being touched or inspired. It really is too bad that The End of the Tour decides against ending with something more for us to chew on, especially after it seems to set itself up for one, but I guess it had to end with…something.