Home » Film » Breathe in the Smaug 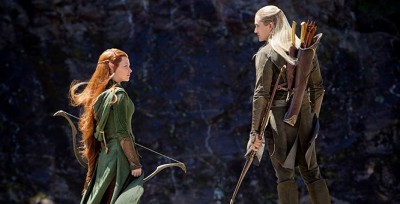 Things you should know by now: (1) All Peter Jackson-directed fantasy films near or top three hours in length; (2) there are deviations from the books because these are movies and not books—I’m told if you would like to read “The Hobbit,” you can still read “The Hobbit”—and (3) Ian McKellen is just the wickedly wizardy best.

My tolerance for grousing about Jackson overstuffing his Hobitses with new content and padding the length is at an all-time low…like “Congressional approval rating” low. Why? Because if you’re paying attention, both An Unexpected Journey and The Desolation of Smaug are better acted, paced and shot than the Lord of the Rings trilogy and happen to be drawn from better source material; admittedly, I haven’t read the books. I wanted to but ain’t nobody got time for extensive dwarven ancestry lessons. If you can look me in the eye and tell me that Martin Freeman’s Bilbo isn’t 10 times the hobbit that Elijah Woods’ Frodo was or that McKellen’s Gandalf hasn’t gotten more nuanced each time out or that the CGI for Smaug (Benedict Cumberbatch) doesn’t make the trolls in Fellowship of the Ring look like cave paintings, we ought not talk movies together.

The story is just so much richer, as it doesn’t stop at “Baddie McEvil tries to destroy the world.” We join Bilbo and his dwarf buddies as they are nearing the secret entrance to the home they were forced to abandon on the grounds of “Oh, dear God, that’s a fire-breathing dragon,” which is an understandable reason to break a lease. We see the specifics of this quest: in order for Thorin (Richard Armitage) to unite the dwarf armies, he needs a jewel that marks him as leader. It’s a jewel Smaug has planted his dragon tush upon.

Unfortunately, the group is seized by a splinter group of elves, including the beautiful and deadly Tauriel (Evangeline Lilly) and Legolas (Orlando Bloom), who may be the single most bad-ass action hero of all time. After they escape, the gang takes refuge in a port city near their home, where a kind boatsman named Bard (Luke Evans) asks them politely to not wake up the sleeping dragon because it will kill them all. So Bilbo goes and wakes the dragon, which is not a euphemism.

There is crazy great action from elf ninjas, wonderful banter between Bilbo and Smaug (who are actually played by Watson and Holmes from BBC’s “Sherlock”) and plenty of orc decapitations. Although I have zero qualms about the length or pace, I will say that the film does suffer a bit from “middle film-itis,” in that it’s not quite as satisfying as the first and isn’t allowed a true end. But if that’s the worst you can say, and it should be the worst you can say, Jackson has only added to the cinematic legacy of his epic series. Hobbit haters get dragon-forged coal for Christmas.